A grand day out


Four weeks ago the recce for this ride was postponed due to heavy rain. What a difference a month makes! Today we were blessed with one of the best days of the year - bright sun shining down from a cloudless sky, lovely and warm with only the most gentle of breezes. A grand day to head out into East Lothian. 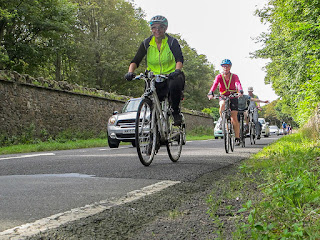 A turnout of nineteen riders was good, without there being so many as to need to split into two groups. Along with the diehards of the group, there were a few new faces and several riders that look set to become the new regulars. Today's ride out to the Merryhatton Garden Centre near East Fortune has become a regular fixture for late August in our Extra runs calendar. A stalwart of the group for a number of years, Logan Strang instigated the ride. He cheerfully admitted one thing he liked about it was there were hardly any hills on the route. In addition, it heads out through some beautiful East Lothian countryside and the lunch stop is very pleasant. This is the third time that this ride has run since Logan's passing, and has become something of an unofficial memorial ride to our sorely missed friend. Today's leader/writer/photographer has led all three and still feels more of a caretaker for Logan's ride rather than the true leader. Following the customary briefing, we left Fisherrow Harbour and made our way to the footbridge that would take us across the River Esk. At this stage it was pleasantly warm, but slightly overcast. Usually we would avoid the main road and take the track behind the racecourse. For a change, we took the main road down to the racecourse roundabout and joined the coast road. It is not the quietest road, but we would have had to join it further along anyway. 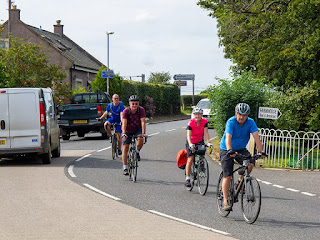 We used our newly developed plan for getting a group safely along main roads. Groups of five riders would be set off at 15 second intervals to make it safer for riders and other traffic. Thanks to Verity [who wasn't on today's ride} for coming up with the plan, and thanks to Alan for acting as main road monitor. We stayed on the main road as far as Cockenzie, where we turned off and quieter roads took us past Cockenzie and Port Seton harbours. A comfort and sweetie stop in Port Seton before joining the main road again. Beyond Gosford House the leader stopped and gave the riders two options; stay on the main road to Aberlady or take the unsurfaced path that ran alongside it. The split was probably half and half. We regrouped and left the main road at Aberlady. Quiet back roads allowed us to ride in one large group again. It was now warm and sunny and the East Lothian countryside looked beautiful. A short stretch of main road followed. We left that behind at Drem railway station. From there, minor roads took us on to our lunch stop at Merryhatton. We enjoyed a nice lunch in the conservatory, but it felt hotter in there than outside! 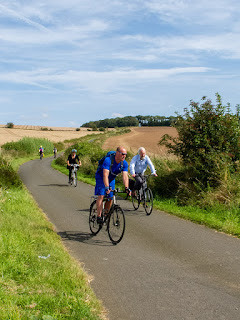 With everyone fed and watered, we headed off on the homeward leg. Past the National Museum of Flight at East Fortune and into the lovely village of Athalstaneford - which lays claim to being the birth place of Scotland's flag. We paused by the church where an interpretation panel tells the story of the flag. Education over, we headed out of the village towards the Haddington road. There always seems to be a headwind on that stretch of road. Today was no exception; but it was more of a gentle breeze and its slight cooling effect was most welcome. We crossed the road for Haddington and took the quiet minor road which skirts the Hopetoun monument. A short stretch on the A6137 followed. This was our only real climb of the day. Deserted minor roads would follow and soon we were speeding down a glorious steep hill. Coming so soon after a climb, smiles and comments confirmed how much it had been enjoyed. We continued until a barrier and red flashing lights brought us to a halt. Yes, we were at the level crossing near Longniddry. Once the train had passed and the barriers went up, we crossed the dual carriageway and took the path and road to Seton East, where another lovely hill took us down to the coast at Port Seton. The same back roads from the morning took us past the two harbours, before joining the main road back as far as Prestonpans. There we joined the coast path, which via the Lagoons and sea wall took us back to Goose Green in Musselburgh. Back across the footbridge and the leader declared the ride officially over.

Everyone seemed to have enjoyed the ride. Great weather, the lovely East Lothian countryside, not many hills and good company - cycling at its best. Thanks to Logan for leaving us this ride - a fitting legacy to our friend. As an additional link to Logan, the leader led today's ride on his road bike (first time on a group ride) which runs on a set of Logan's wheels.