On the right track for a lovely ride

For what will probably be the final Extra ride of the year, today saw us head west to Bo'ness Station on the preserved Bo'ness and Kinneil Railway. It was a lovely route, being very quiet and peaceful in many parts. There was one puncture which delayed us slightly; but no one minded as it was in a lovely setting with the warm sun beating down on us. The weather was much better than expected with some lovely warm sunshine at times. Twelve riders turned up. Those that didn't, missed a lovely ride that was enjoyed by all. 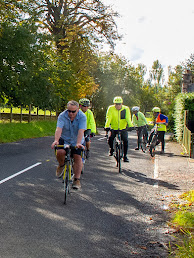 Following an in depth route briefing from the leader, we left Craigleith and took the familiar route to Cramond Brig via Silverknowes and Barnton. After the obligatory pause on the bridge, we headed up to the Burnshot Bridge and took the road towards Kirkliston. It was good to leave that busy road behind and wheel our bikes up the rough and rocky path to join the old railway path. Riding through the trees, a few of the group commented on how quiet and peaceful it was. That peace was interrupted by several riders shouting, "turn left!" as three riders sailed past the left turn up to the road. In no time at all, we had regrouped and were riding through Kirkliston. After a comfort stop at the leisure centre, there was a short stretch on the road to Winchburgh. A bridge under the M9 motorway, and we turned left onto a quiet road. Another bridge under the M9 and we were in lovely countryside heading towards Niddry Castle. We left the road and joined the Union Canal towpath for the next 4 miles to Philipstoun. From there more quiet roads led us towards the busy A904. We crossed the M9 for the third time, this time the bridge taking us over it. A very short stretch on the busy A904, a left turn and we were again on a quiet road. There followed a delightful downhill run to Blackness where we joined the lovely coast path towards Bo'ness. Most of the coast path is wide and well surfaced, but there is a stretch through the woods that is rough and unsurfaced. Through Bo'ness, and we arrived for our lunch stop at Bo'ness Station, where we all sat outside to enjoy lunch in the warm sunshine. A few took the opportunity to have a look round and visited the model railway exhibition. 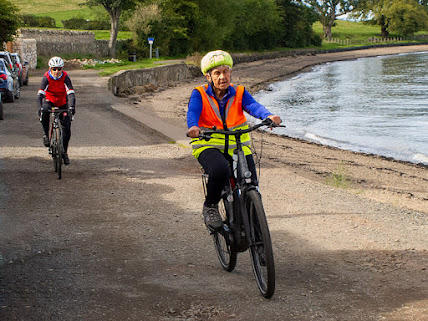 The coast path took us back to Blackness, where we joined NCN 76 through Wester Shore Wood and the Hopetoun Estate. This section was by far the roughest and bumpiest of the day. Perhaps not surprisingly, one unfortunate rider suffered a puncture on this stretch. Is there such a thing as an idyllic setting for a puncture? If so, I think we found it. As a few of the group set about sorting the puncture, the rest of us enjoyed the break with the warm sunshine beating down, the beautiful estate grounds and deer grazing nearby. Puncture fixed, and we were rolling again. We left the estate and made our way into South Queensferry. Skirting the town, we were soon at Dalmeny village. From there, the path beside the B924 and A90 led us back to Cramond Brig, where we paused on the bridge. Back to Craigleith by the same route we had taken out. Here the leader declared the ride over.

Thanks to Alan for leading such a successful ride. There were a number of comments on a lovely route and great scenery, in addition to how quiet and peaceful it was in places. The weather was exceptionally kind to us - much better than expected. Earlier, one rider had turned to the writer and said, "I knew there was something different about this ride, but I couldn't put my finger on it. Then I realised - there was no wind". A conversation ensued on what a windy year it's been. Thanks to Saquib for his maiden outing as backmarker. A job well done.