Today's ride saw us head to that ever-popular destination of South Queensferry. The weather forecast suggested we were in for pleasant temperatures and sunny intervals. Given some of the torrential downpours of recent days, we were hoping it was accurate. What we eventually got was blue skies, bright sunshine and higher than expected temperatures. A turnout of 18 riders was acceptable - that seems to be about the figure we expect these days. 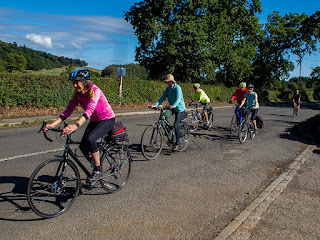 Following the obligatory route and safety briefing from the leader, we headed to Leamington Bridge via Bruntsfield Links. From there we continued to the well known zig-zags at Russell Road via Fountainbridge and the Telfer subway. One rider struggled up the zig-zags and stopped at the top with gear problems. Alan, our resident mechanic was on hand to help, and following a slight delay we were all back together and on our way via Craigleith, Silverknowes and Barnton to Cramond Brig. We stopped on the bridge whilst two riders offered round cake. A few lucky riders also saw a kingfisher darting about above the river below. A short sharp climb and we were on the path beside the busy A90. Up beside the B924 and we paused at the entrance to the Dalmeny estate to regroup. Through Dalmeny village and on to the path that brought us out at the Co-op in South Queensferry. Down the hill, right at the new traffic lights and we were on South Queensferry High Street. We parked up at the steps leading down to the beach. On such a lovely sunny day, most of the group stayed there to enjoy their picnic lunches. 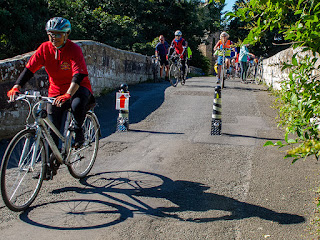 Lunch over, we mounted up and rode along the cobbled High Street through the town, turning off to head under the Forth Rail Bridge and into the Dalmeny estate. The path varied between smooth tarmac and rough unsurfaced track with a few climbs and descents to contend with. Despite the heavy rain in the last few days, mud wasn't a problem. We emerged just above Cramond Brig, where again we paused before heading back towards town. Our route back being the same as we had taken out in the morning. At the Cramond Road South / Silverknowes Terrace cut-through we came across several dog walkers who believed 18 cyclists had no right to be on this recognised shared cycle and foot path. The backmarker stopped to politely debate the matter with them. Not sure if it will make any difference. From there we had a relatively trouble-free ride back to the Meadows, making a couple of detours to avoid road works. Here the leader declared the ride officially over.

All seemed to have enjoyed the ride. One comment summed it up perfectly, "I've been to South Queensferry many times; but this was a lovely route and it's so much nicer when riding in a group. Thanks to Yaz for leading, Neil for back marking and the weather for being so kind to us.