﻿
Today's ride took us out to South Queensferry via the lovely Dalmeny Estate. Last year, today's leader led her first ever ride. On that occasion she set a precedent with there being two leaders. Today she was flying solo; thus proving to the group [and herself] that leading a ride is not as daunting as some would have you believe. Maybe that is why she received [an unheard of] round of applause following the pre-ride briefing. 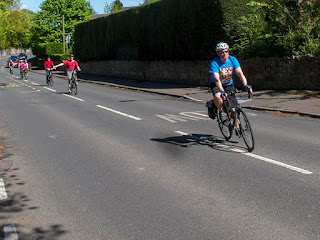 It was great to be blessed with lovely weather. Warm, sunny, blue skies and little wind was the order of the day. A turnout of twenty four riders was good and meant we only needed one group. As ever, it was good to see some new faces. There is so much to be said for a group which has the philosophy of "no need to book, just turn up and enjoy the ride". The group walked away from the start point. Yes, walked! Half  the width of Middle Meadow Walk had been dug up at that point, forcing us to walk along pushing our bikes for the first 100 yards of the ride. We remounted and rode to the Leamington Bridge via Bruntsfield Links. A short stretch on the canal towpath, down past Fountain Park, through the Telfer subway, Russell Road and we were riding up the zig-zags to join the Roseburn Path. The Roseburn and Telford Paths took us onwards to Granton, past the gasometer which was gleaming in the sunshine. From there it was down to the waterfront and along Silverknowes Esplanade to Cramond for a comfort and sweetie stop. A sharp little climb up School Brae followed to join Whitehouse Road. A right turn down the delightful little Peggy's Mill Road and we were on the River Almond Walkway. We had the mandatory stop at Cramond Brig. What should have been a quick stop ended up being more lengthy due to a mechanical problem requiring attention. We followed route N76 through the delightful Dalmeny Estate, which was lovely at this time of year in the sunshine. We followed the path that skirts the coast to emerge beside the Forth Rail Bridge. We thought the paths through the estate were busy; but that was nothing compared to how busy South Queensferry was. Even on nice days there is often a cool breeze blowing off the Forth. For once, this was not the case. Perfect picnic weather. 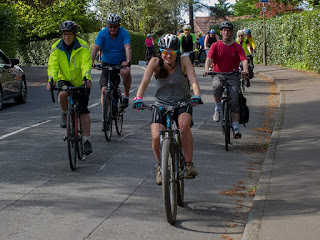 As we were preparing to head off after our lunch stop, a few of us were reminiscing about something that happened a couple of years ago. Despite it sounding too good to be true, the leader told us he had discovered a way of avoiding the steep climb up the main road to the Co-Op where we would join the cycle path. Unfortunately, the alternative route involved carrying bikes up a couple of flights of steps! Needless to say, we have never used it since. The short, steep climb over and we were on the cycle path that took us to Dalmeny village. Back into Dalmeny Estate, this time on roads rather than the paths of the morning. There were a couple of hills to deal with in the warm sunshine; but payback came in the form of a glorious downhill section. Another stop at Cramond Brig - this time a brief one. We made our way back through Barnton, Davidson's Mains, Silverknowes and past Craigleith. From there, we took almost the same route back as we had taken out in the morning. The difference being that we returned to The Meadows via Tollcross rather than Bruntsfield Links.

Everyone seemed to have enjoyed the ride. The weather certainly helped. Thanks to Dawn on her first time as sole leader; and I'm sure she will have appreciated David's assistance as backmarker-cum-wingman.