A cool picnic beside the Forth 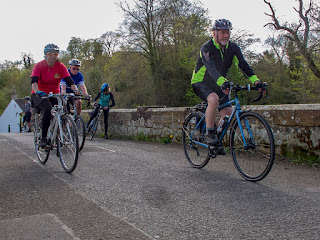 The first 20 Milers Extra ride of 2018 saw us head out to Blackness Castle on the shores of the Firth of Forth. Great weather at the start had us expecting a warm and sunny picnic beside the castle. Alas, come lunchtime the cloud had rolled in and a cool breeze was blowing in off the Forth. But, overall the weather was reasonably kind to us - we did have long spells of sunshine, it was mostly warm and there wasn't any rain. Perhaps those that had continued to ride throughout the winter thought they were owed some magnificent weather. Fingers crossed that is on the horizon. 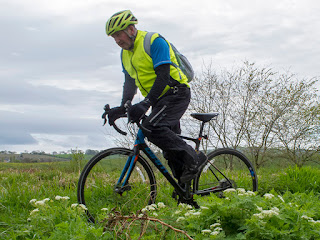 As usual when the Extra rides see us head out west, our start point today was Craigleith. In amongst the turnout of nineteen riders, it was good to see a few new faces along with some we had not seen for a while. We headed off in one group along NCN 1 via Silverknowes and Barnton to Cramond Brig. Following what has become a mandatory stop there, we headed up the path beside the road towards Dalmeny village. On this stretch, a confused-looking cyclist was trying to work out how to get to the other side of the A90 as the Burnshot Bridge was closed. The writer was able to point him in the right direction via the subway and corresponding diversion. From Dalmeny village, the cycle path took us to South Queenferry, onto the coast road and into the Hopetoun estate. We had made such good time that it was only twelve o'clock as we rolled up to our lunch venue  - Blackness Castle. Was it better to choose a picnic table closer to the visitor centre and further from the shore, or beside the shore? It made little difference; the cool stiff breeze seemed the same whatever the choice. Beneath a cloudy sky it wasn't perfect picnic weather, but it wasn't too bad. Once food had been consumed, no one wanted to hang around unnecessarily. The lure of the big climb of the day awaited. 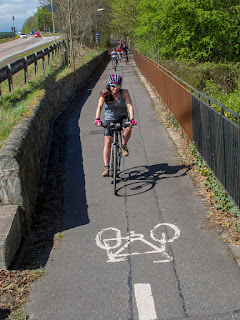 We left the castle and rode the short distance to the newly-opened village shop, where several of the group grabbed a quick coffee to warm up. A short climb followed by a flat section, a left turn and the main climb of the day lie before us. Not ideal straight after lunch, but everyone got up without any problem. A right-left to cross the A904 and we headed to Philipstoun. Turning right into an housing estate, it never looks as if the canal will lie ahead. But meander through the estate to arrive at a row of garages, and just up the slope lies the canal towpath. A short distance along the towpath and the group ground to an halt. A very aggressive mute swan did not want us to pass. The reason why, soon became clear. His mate was on the nest just a few yards from the path. One by one, we gently made our way past, pushing our bikes which we kept between ourselves and the aggressive bird. All safely past, we remounted and rode away leaving the swans in peace. A lovely ride along the towpath, without further drama followed. Leaving the canal behind near Niddry Castle, we followed minor roads before emerging in Kirkliston. A planned comfort stop came to nothing when we realised the sports centre was closed. A little further along we joined a path that led us through the trees, then followed the road to Burnshot Bridge where we negotiated the roadworks. The lovely new cycle path led us to the subway and back onto the path to Cramond Brig. A brief stop there, and then back to Craigleith via the same route that had taken us out in the morning. Here the leader delared the ride over. Thanks to Mike for leading the first Extra ride of the year. Everyone seemed to have enjoyed it and the only drama had been with the swan. Yes, the lunch stop could have been a bit warmer, but all in all a very enjoyable ride. It always seems as if summer is beginning [or at least just around the corner] when the Extra rides begin. Here's hoping for a great summer of cycling.