An excursion across the Forth 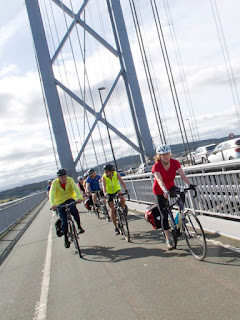 For the final 20 Milers Extra ride of the year we headed across the Forth into the Kingdom of Fife. To wind up this year's series of Extra rides we were blessed with beautiful weather. Warm, sunny, lovely blue skies and barely a breeze. This was what we would have expected in July rather than mid-September. Meeting at our usual starting point when heading north or west on these rides; we had a very respectable turn out of 20 riders. As ever, it was good to see some new faces and less regular attendees in the mix. There was even a tandem. We rolled away from the Craigleith marker taking familiar paths and roads to Cramond Brig. It has become a group custom to stop on the bridge. This time was no exception. We had just climbed the hill beside the Cramond Brig pub and joined the path beside the A90 when a loud bang signalled an impressive puncture. The puncturee was near the back of the group. As a result; by the time the leader was made aware of the situation, quite a distance had been covered. The group stopped. But the townies amongst us complained about the smell of manure coming off the adjacent fields. The decision was made to push on and find a less smelly place to wait. After quite a long wait at the entrance to the Dalmeny estate, the puncturee and four helpers came into sight and we were able to carry on. We pushed on through Dalmeny village and took the cycle path through the new housing development on the edge of South Queensferry. Avoiding the centre of town; quiet back roads and paths took us to the Forth Bridge. A short stop to admire the view of the three bridges and then it was up and on to the path that took us across the road bridge. Today was the busiest the writer has ever seen the bridge. It was teeming with cyclists and pedestrians. But the wide path meant there was room for everyone, with opportunities to admire the stunning views. The Forth was mill pond calm and a beautiful blue beneath the clear skies, with superb visibility. Across the bridge we came upon roadworks which saw us on a rough, unfinished shared pavement before rejoining the very unpleasant and busy road into Inverkeithing. Leaving Inverkeithing behind us, we were soon on the Fife coastal path. This is a lovely path with splendid views. A real treat, especially on suck a glorious day. Those that had never been on this path before were completely blown away by it. 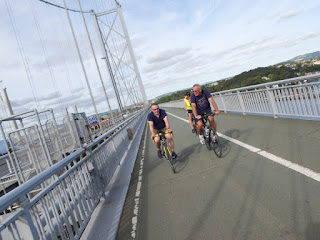 One rider got so excited that he decided to dance with his bike! There was that familiar banging and scraping sound that suggests a rider is about to fall. Those in front turned round to see what the commotion was. His front wheel was alternating between being in the dirt and on the tarmac with the whole bike dancing from side to side. Collectively the group must have been thinking, "he's going down". But to the relief of all, somehow he regained control and remained upright. The greatest sigh of relief came from the rider alongside him who must have thought he was about to be wiped out. We left the coastal path and had a short spell on the busy road through Aberdour to get to Silversands Bay. Picnics came out and food was bought from the busy cafe. Soon we were all sitting in the sun enjoying our lunch whilst looking across the sandy beach and the blue waters of the Forth. On such a lovely day with the sun beating down from a clear sky, even the Burntisland aluminium smelter across the water looked majestic. 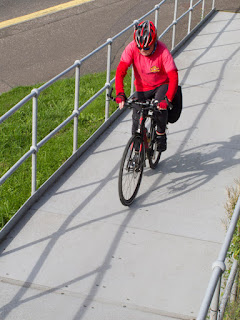 Throughout the day, many had suggested this may well be the last day of such weather this year. As a result; in an unprecedented move, three members of the group decided to stay and enjoy the sun rather than head back. As Jim was one of the group, we were confident they would have no trouble finding their way home and bid them farewell. Our return route took us back the way we had come. Sometimes that can seem a bit boring. But with the coastal path, no one minded at all. We stopped briefly to admire the remains of an old chapel. We left the path behind and entered Inverkeithing. Back down the busy main road, through the roadworks and we were back on the bridge admiring the views from the opposite direction. A quick comfort stop at the viewing area and we were skirting South Queensferry again. The path alongside the A90, a brief stop on Cramond Brig, and then the familiar roads and paths back to Craigleith. Thanks to Julia for such a lovely route and for arranging such marvellous weather. It certainly felt like we had finished our Extra rides series on a high note. We will probably have to wait until May before these rides start again. But of course, the standard 20 Milers rides keep going throughout the year, including the short special one on Christmas Day.