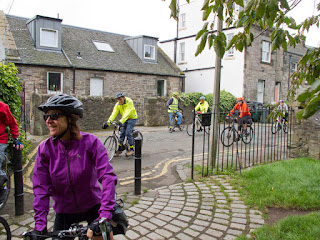 For those that don't like steep hills and know of it; mention of Falside Hill can lead to feelings of serious trepidation. A mile or so south-east of Wallyford in East Lothian; there are three routes to the top. The hard way is to approach from the Wallyford side just past the A1 junction. There are two approaches from Tranent. Whilst both are easier than the hard way, both are still something of a challenge. For today's ride, the leader was promising an easy ascent of the hill. Was this a wind up, or was it a real possibility? It was dry and overcast with the sun trying to peep through as the riders began to gather at the start point. Following the customary briefing, the 26 riders headed off towards the Innocent tunnel. In amongst the regulars were some riders that hadn't been out with us for quite a while and a smattering of new faces. Turning off long before the tunnel, we made our way up St Leonards Bank. This little-known dead end street is delightful. On one side are lovely houses; on the other is a to-die-for view of Arthur's Seat. A real undiscovered gem in the heart of town. This was discovered by one of our regular riders a couple of years ago and we continue to weave it into appropriate rides for the "wow" factor. An indication of how well hidden it is can be shown by the fact that Ken has lived in Edinburgh for over 50 years, yet only discovered it a couple of years ago. 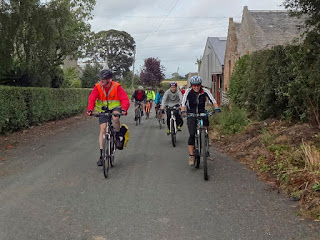 Following a short stretch where we had to walk along a very rough path, we were soon in Holyrood Park and whizzing down to Duddingston village. From there we made our way past Duddingston golf course, Milton Road and joined the Innocent Railway path at Bingham. From there we took the regularly used route to emerge at Musselburgh station. Here we had a brief pause whilst the leader offered round sweeties. From there we made our way through the houses, took the bridge over the River Esk and onto the Grove to Whitecraig. At Whitecraig we joined the cycle path towards Dalkeith before turning off and climbing up to Crossgatehall to join the Pencaitland railway path. After a couple of miles of easy riding on the whin dust path, we turned left onto a less smooth minor path. Within a short distance we were confronted by a flight of steps which forced us to dismount and walk. With the steps behind us, we remounted and continued along the path passing a cemetery that appeared to be in the middle of nowhere. Waiting to regroup in Elphinstone, a collie dog was very keen to round up the group of cyclists. So much so, that he had to be dragged away by his owner. There then followed what can only be described as the closest the 20 Milers ever get to single track mountain biking. This short stretch was quite tricky. But whilst there may have been one or two heart-in-the-mouth moments, everyone got through safely. The fact the leader had warned everyone of what was to come obviously helped. A little more riding on a better quality path and we emerged onto the road at the top of Falside Hill. So it was true! It had been possible to get to the top of Falside Hill without too much effort. The only compromise being the need to negotiate a couple of off-road sections; one short stretch of which had been quite tricky. Now for the reward. We sped down the steep hill. A very quick and enjoyable way to get to our lunch stop at Craig House on the edge of Whitecraig. 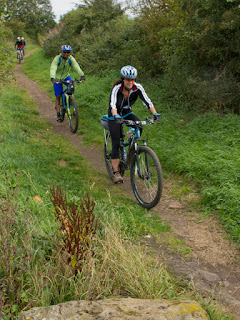 Suitably replenished after a good lunch, we rolled away from Craig House and made our way to the pleasant village of Inveresk. By St Michael's kirk we negotiated a gate and made our way down to the path beside the River Esk which took us back to Tesco in Musselburgh. We crossed the busy Mall Avenue and made our way towards Fisherrow Harbour via Eskside West; remembering to duck as we rode under the bridge which carries the aptly named Bridge Street. After a brief pause at Fisherrow, one final detour took us up Newhailes Avenue and Newhailes Crescent to emerge on the busy Edinburgh Road through a gate set into the wall. A few hundred yards on this road and we turned left through another hole in the wall to join the Brunstane path. This lovely path which hugs the Brunstane Burn brought us out at Brunstane station. From there we joined the familiar NCN 1 for our run back into town. It was on this path at Jewel Park that we had our only puncture of the day. Thanks to Alan Orr for ensuring the unfortunate rider was back under way with minimal delay. Positive feedback suggested that everyone enjoyed the day's ride. Good weather, some unfamiliar territory, a short stretch of challenging off-road riding, good company - what more could anyone want from a 20 Milers outing? Ah, of course; the chance to ascend a very tough hill with minimal climbing.