Today's outing was our second try at a route that we attempted in February 2020 but which we were forced to abandon because of the dangerous winds of Storm Clara. No such worries this time. The day was bright and sunny with just a gentle breeze. By the afternoon, the thermometer had reached a pleasant mid-twenties – thankfully escaping the ridiculously high temperatures being experienced elsewhere in the UK.

Seventeen of us assembled at the Meadows. Our leader, Alison, gave a comprehensive briefing, with warnings of several hills along the way. And then we set off, starting out on the familiar route over Bruntsfield Links and up to Hermitage Drive, and then through Braidburn Valley Park to Greenbank. This involved a fair bit of climbing: a taster for what was to come. 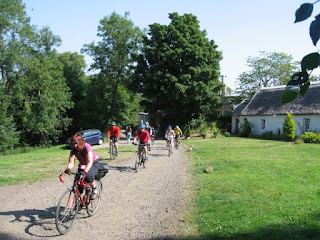 On leaving the park, we made a sharp left turn onto the Cockmylane Path. This is part of a traditional route known as "Robert Louis Stevenson's Road to Swanston and the Pentlands". Stevenson was born and brought up in the New Town, but his parents rented a holiday cottage in the old village of Swanston at the foot of the Pentland Hills. Our route today was the route that RLS supposedly took when travelling between home and cottage. Clearly Stevenson didn't use a bike; the steep rough path is more suited to walkers than cyclists.

After a substantial climb, we emerged into Caiystane Drive, and then across Oxgangs Road and up Swanston Road to Swanston village. Although still heading up hill, we were now on a well-surfaced road. We stopped for a long-ish rest stop at the top of the village, amid the thatched cottages that give the area its picturesque appearance. (According to one source, these are now the only inhabited thatched buildings in the Lothians.) Some of the group wanted to know where RLS's cottage was. Unfortunately, this is not visible from the village, being at the end of a track on the far side of the farm steadings. 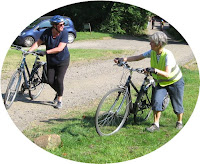 The rest stop over, we headed eastward along another track – very rough but at least it was level - which emerged at the main road at Lothianburn. We now had to deal with two tricky road crossings, these being the busy slip roads leading onto and off the City Bypass. Our leader did a good job of shepherding us across these without incident.

Our next leg took us through the Winton Estate. This has no connection with the estate of Winton Castle near Pencaitland (which we sometimes pass through when cycling in East Lothian), but is a modern housing estate named for the family of the wife of the owner of the land in the 1930s. We paused briefly to look at a much older house on the edge of the estate. Thanks to some instant on-line research by one of the group, we discovered that this was the 18th Century Morton House, part of the Mortonhall Estate.

Speaking of which, after a nice downhill run along Frogston Road, we were soon at our lunch stop at the Mortonhall Garden Centre. A few of the group headed for the restaurant inside the centre, while others elected to picnic outside in the sun.

After lunch, we regained Frogston Road, where it was obvious that something was very wrong with the traffic, with cars backed up in both directions as far as the eye could see. It turned out that this was the result of wildfires on the City Bypass at Straiton. (Wildfires in Edinburgh? Whatever next?) Of course, traffic jams don't bother us. With a certain amount of schadenfreude we were able to whiz past the stationary cars to quickly reach the traffic lights at Burdiehouse Road and Captain's Road. 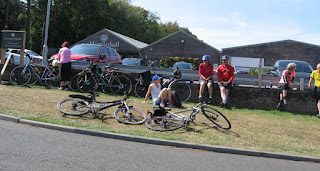 The next stage was a very pleasant mile or so through Burdiehouse Burn Valley Park, along a well-surfaced path with just a few gentle ups and downs. This was followed by a short stretch though Ellen's Glen and into Gilmerton Road. We continued past the Inch Park, then along the edge of Craigmillar Castle Park and on to the familiar Innocent Path and so back to the Meadows.

Thanks to Alison for leading us on such a delightful route. Thanks also to Ken for stepping up to back mark at short notice. At 16 miles, it was not exactly a long ride, but with the initial hills and the rough paths it was just enough of a challenge to make it a worthwhile day out – and a most enjoyable one.