In the wheel tracks of Logan

Although it was a week earlier on this occasion, the 20 Milers Extra ride to the Merryhatton Garden Centre has become a regular fixture for the last Saturday in August. As mentioned at the briefing, this ride remains as a lasting legacy to the stalwart of the group, Logan Strang. Can it really be five years since he passed away? It's a lovely route that meanders through the delightful East Lothian countryside. As Logan used to say with a wry smile, with the exception of one hill, it's relatively flat. Despite a weather forecast suggesting light rain until early afternoon, it was good to see a turn out of 18 riders. In the end, there were only a few spots of rain; but it was quite windy which was most noticeable on the return leg. 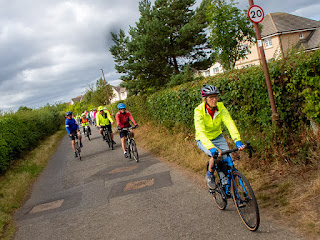 With the briefing over we left Fisherrow Harbour, crossed the River Esk by the Electric Bridge and headed to the track beside the sea wall. The track remains open, but the views are obscured by the fencing in the area - all part of the ongoing work on the flood defences. As a result, we had to nip onto the coast road and back onto the path to reach Prestonpans. The main road and new shared use path took us to Cockenzie Harbour and through quiet back streets and paths to avoid the main road as far as Seton Sands. The coast road wasn't too busy, and with a helping tail wind we were soon approaching Aberlady. The leader stopped at a gateway and gave the riders a choice - stay on the main road or take the unsurfaced path that winds through the trees alongside the road. The majority took the latter option, and we were soon on a quiet back road that bypassed Aberlady's busy high street. We were now on quiet roads passing typical East Lothian farm land. The county is one of contrasts. Many think only of its coastline and lovely beaches. But head inland (as we were doing) and there is delightful rolling farmland. It is then topped off by the bleak wilderness of the Lammermuir Hills. A further stretch of main road took us to Drem station, where we turned off and quiet roads took us to Merryhatton and our lunch stop. All but three of the group went to the garden centre café. The remaining three continued a short distance up the road and picnicked in the peace of the New Athelstaneford cemetery. 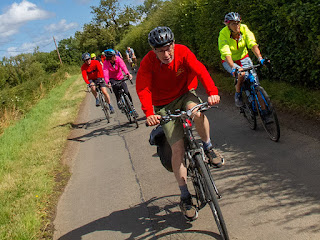 Despite grey skies and a spot or two of rain, the picnickers remained dry. We regrouped and headed past the Museum of Flight onwards to Athelstaneford. Pausing beside the church, we read the notice board explaining the supposed origin of the Scottish flag. Leaving the village behind, we were confronted by the obligatory headwind that seems to go with that stretch of road. We pressed on past the Hopetoun monument to be confronted with the only real climb of the day. Fortunately, the wind was now from the side.  A brief pause, a short stretch of flat road and it was payback time as we zoomed down a steep hill. Relatively straight and flat roads took us to the level crossing beyond Longniddry. The barriers were down, so we had to wait a few minutes before the train passed and they went up. Across the dual carriageway and onto the cycle path. We realised we were four riders down. It turned out they had taken the road into Longniddry rather than to the level crossing. A few minutes of waiting and they re-joined us. A short while later we were zooming down another hill to the sea in Port Seton, where we had a comfort stop. Our route back was the reverse of out outward one, but with a detour to pass the Prestongrange Museum. At the Electric Bridge, the leader declared the ride over. Some headed away for tea and cake, whilst the rest headed back to Fisherrow for the return journey to Edinburgh.

Once again the Extra ride to Merryhatton was a success. The weather stayed dry and was pleasant; shame about the wind, but it could have been a lot worse. Everyone seemed to enjoy the ride - which is what it's all about. Thank you Logan for leaving such a great ride as your legacy to the group.