Crazy as it may seem, being March, today's ride was the first one of the year that went the full distance. This time the weather was on our side and we made it to Davidson's Mains and back as planned. Despite the familiar location, the leader came up with an imaginative itinerary that was entirely new to the group. The route was essentially a loop around the east, north and west of the city, taking in several parks, some pleasant bike paths and a stretch of the waterfront with very little climbing and only a few short stretches on main roads. 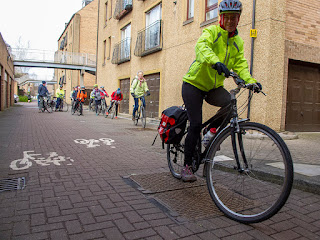 Given that there was a moderate breeze and some sunshine, a turnout of fifteen riders was slightly lower than expected. But it was good to see a couple of new faces in the mix. Following the customary route and safety briefing, we headed off towards the Innocent Railway. We could already see this was not the usual way to get to Davidson's Mains, so were expecting something less conventional. The leader took us through the back streets of Bingham, through Mountcastle and into Figgate Park. After a brief halt at Figgate Pond, we did a circuit of the park exiting on to Mountcastle Terrace. From there we took the bridge over the railway, joined Fishwives Causeway and were soon on Craigentinny Crescent for our first history lesson of the day courtesy of Mike. He told us the story of the Craigentinny Marbles - the impressive mausoleum that looks totally out of place in an Edinburgh suburb surrounded by 1930's bungalows. History lesson over, through the back streets of Restalrig and we were riding across Leith Links. As we made our way to The Shore, we stopped for our second history lesson of the day thanks to Mike. This time we were in front of Lamb's House, a fine merchant's house tucked away in Burgess Street. From The Shore, we took the cycle path into Victoria Park where we stopped and cakes were passed around. Through the tunnel on the Trinity Path and we were soon on the path with the Firth of Forth on our right and the busy Lower Granton Road on our left. It is great that the path has now been extended allowing us to stay on the path all the way to Granton Square. Through Granton, along the Telford Path, a cut through to the Blackhall path, along a slightly muddy path and we arrived in the car park at Tesco's in Davidson's Mains. The leader had all bases covered and arranged for the pub's beer garden gate to be opened so we could all wheel our bikes in. Believe it or not, we once went there and were told to wheel our bikes through the pub! Whilst a few of the group had lunch beside the fire inside; the majority sat outside. Whilst not that cold, they did endure a few spots of rain. Perhaps a little early in the year for alfresco dining? 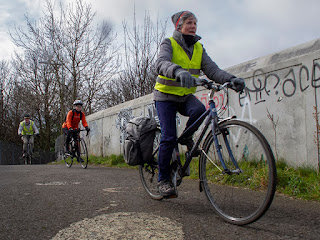 Lunch over, we left the pub and made our way through Davidson's Mains Park, across the busy Queensferry Road and in to the back streets of Clermiston. For most of us this was new uncharted territory. We passed the Drumbrae Leisure Centre and weaved our way through Drumbrae and East Craigs. It was on this section that a few of us at the back of the group came across a couple of teenage cyclists; one of whom was having problems with his bike. His front brake had jammed on and the wheel wouldn't turn. A couple of minutes later and it was all fixed. We left a very grateful cyclist and headed off after the group. We crossed the busy Glasgow Road, passed the David Lloyd Club and made our way to Broomhouse. Down beside the tram track, past Jenner's Depository and onwards to Murrayfield and Roseburn Park. From there we returned to the Meadows by the well-worn route via Russell Road, Dalry Road, the Telfer Subway, Leamington Bridge and Toll Cross. At the Meadows the leader declared the ride officially over.

It was great to have our first ride of the year run its full course rather than be abandoned or curtailed, as happened with the previous two. One of the challenges facing our ride leaders is to come up with new and interesting routes which don't just repeat the same old rides that we do again and again. Today Graham succeeded in doing just that by linking together familiar routes in an unfamiliar way, resulting in a good ride enjoyed by all. Thanks also to Mike for the two history lessons. Good weather and lunch outside added to the feeling that 2020 is truly underway for the group following a couple of false starts.

Just wanted to add my thanks to Graham for coming up with this interesting route, and for arranging things so well with the pub. Regarding the history lessons, I hope you were all paying attention because there will be a short test before next month's ride.