Somewhere new to blow away the cobwebs 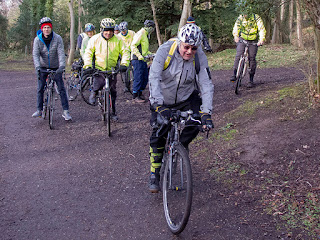 With the 20 Milers having been going for fifteen years, it is very easy  to think there is nowhere new left for us to visit. So it is always great when a leader manages to pull somewhere new out of the bag. That is exactly what Jim did today - leading us out to Covenanters Wood beside Dreghorn Barracks. It's a delightful little woodland with plenty of paths to explore and also has the remains of some historically significant First World War training trenches. Unfortunately the weather was not on our side. Strong winds forced a change to the planned route. The section from Covenanters Wood to Heriot Watt University (our intended lunch venue) would have been very open and exposed. In the interests of rider's safety, the decision was made to scrap that section and head to Colinton for lunch. This  resulted in a considerably shorter ride. But at least the ride went ahead safely. 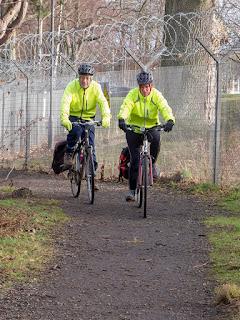 Low turn outs are not uncommon in February, and  today's strong winds resulted in just eleven of us setting out from the Meadows. Via Bruntsfield Links and Whitehouse Loan we made our way to the back streets of Morningside. From there we rode through Braidburn Valley Park, skirted the edge of Colinton Mains Park and rode through the Redford estate to emerge on Redford Road. A short stretch on that busy road, which we carefully crossed and we entered Covenanters Wood. For the majority of the group, this was their first visit. The leader gave a brief talk introducing us to the wood and telling us a little about its history. Unsurfaced, but not too rough or muddy paths took us further into the woods. Another stop to look at the First World War training trenches. The old and the new were either side of the path; to our right were the training trenches, to the left a high fence topped with razor wire - beyond which lay Dreghorn Barracks. A pleasant off-road run saw us make a complete circuit of the woods. Back to the start and we set off on a second circuit. But this time we exited the woods part way round and made our way through a new housing estate. Dreghorn Loan led us to the traffic lights in Colinton village and to our lunch stop - the Colinton Inn. Another something new - a pub we had never visited before.

With the group fed and watered, we set off on our relatively short run back towards town. A ride along the busy Colinton Road, before turning off and meandering through the quiet back streets of Craiglockhart. We then joined the canal towpath which took us back to the Leamington Bridge. This stretch of the canal is so charming and delightful that it begs the question, "are we really in a city?" At the top of Leamington Terrace, the leader declared the ride officially over. Thanks to Jim for leading us to somewhere we hadn't been before, and finding a new lunch venue. It was definitely the right call to change the route to cut out that open and exposed section in the interests of safety. It did result in one of our shortest rides for quite some time. But a short, safer ride is still better than having to cancel.