In the footsteps of Robert Louis Stevenson 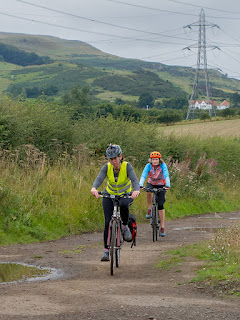 For today's 20 Milers ride, the leader took us on a "themed" ride following a traditional, waymarked route: Robert Louis Stevenson's "Road to Swanston and the Pentlands". We followed the route he supposedly took between the New Town and the ancient village of Swanston, at the foot of the Pentland Hills. As the so-called "road" was more akin to a footpath, we had to contend with more off-road riding than usual. Despite being rough and bumpy in places, we managed it without serious mishaps; no doubt helped by the fact it was dry.

With the Festival over and most people [and Edinburgh] back to normal after the summer, a turnout of 21 was slightly lower than may have been expected; but perfectly acceptable and manageable - only one group required. The weather was dry, overcast and pleasant, rather than warm - obviously autumn is on its way. We left the Meadows and made our way to Braidburn Valley Park via the familiar route taking in Bruntsfield Links and the back streets of Morningside. A combination of cycle paths (some were rough, steep or both) and quiet residential streets took us through Oxgangs. On this section, the leader stopped beside an old building and gave us a short talk about its significance in the history of Edinburgh's public water supply. Leaving Oxgangs behind, we crossed a bridge over the City Bypass and headed past the golf club to the delightful village of Swanston that nestles at the foot of the Pentlands. We paused a while to admire the village and refuel with cake and sweets. It is hard to believe such a lovely little village is so close to the centre of Edinburgh, and even closer to the City Bypass. The gate that led into the Pentland Hills was not at all cycle-friendly. As a result, a few minutes followed where a combination of dancing with bikes and lifting them over a gate ensued. There then followed a section of rough and bumpy path which descended to emerge beside the very busy Biggar Road. Fortunately, we did not need to cross that. But we did need  to carefully cross the on and off sliproads of the City Bypass. Across Biggar Road and we were meandering through quiet residential streets. A further stretch of rough, bumpy path took us to Broomhills and on to Frogston Road East. A short run along the  road and we were at our lunch stop - Mortonhall Garden Centre. The rough, bumpy paths had claimed two victims. Punctures were fixed during the lunch stop. 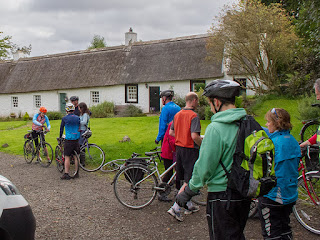 The cafe at the garden centre is a vast improvement since we last used it and everyone enjoyed their lunch. Punctures repaired, we made our way back along Frogston Road East. Through the traffic lights and we turned right into the back streets of Burdiehouse. We went into Burdiehouse Valley Park and followed the Burdiehouse Burn as far as Ellen's Glen Loan. Ellen's Glen Road took us to Gilmerton road, which we took before turning onto Glenallan Drive to skirt the edge of The Inch Park. A short stretch on Old Dalkeith Road followed before we headed into Craigmillar Castle Park. Along Peffermill Road, across it and into the industrial estate. This cut-through brought us out at the Innocent Railway for a straight forward run back to the Meadows. We had a slightly surreal moment as we rode through the Innocent Tunnel. A pedestrian was listening to music on their phone, so the tunnel was filled with an Abba track. Interesting acoustics in the tunnel! 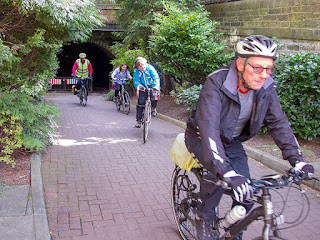 At the Meadows, the leader declared the ride over. Thanks to Mike for leading an interesting and somewhat different ride that everyone seemed to enjoy. At 18 miles, it was shorter than usual; but had plenty of variety. There was even sufficient off-road riding involved to keep the wanna-be mountain bikers amused. Having avoided it for a number of years, the Mortonhall Garden Centre cafe is definitely somewhere we will be happy to use again. Rightly or wrongly, we don't usually mention the backmarker, despite it being a thankless but vital role. But today's incumberent, Verity certainly deserved thanks. Still recovering from the effects of a recent accident, she did a great job. We were all releived that her injuries were not worse.