An Extra swansong into West Lothian 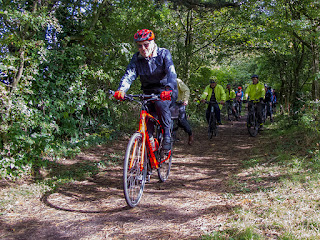 For our final Extra ride of the year, we headed into West Lothian for a picnic lunch in Almondell Country Park. Before the start we encountered a wee boy on a scooter that could have talked for Scotland; the weather was kinder to us than the forecast had suggested and once again, we had to contend with a few rough and bumpy stretches of path. There was also a brief delay whilst one of the group played good samaritan to a stranded motorist.

As is the norm when heading out west, our meeting point was the Craigleith path junction. Whilst waiting for the riders to arrive, a young boy turned up on his scooter and began chatting to us. A minute or two later, his dad arrived; but like the rest of us - couldn't get a word in. He must have talked non-stop for almost ten minutes. If ever talking became an Olympic sport, we had just met Scotland's future gold medallist! By now it was time for us to leave. A turn out of twelve was acceptable; but it would have been nice to have finished this year's Extra rides with a slightly higher number. The forecast said it would be a dry, mild but overcast day. It did stay dry, but we saw more sunshine than expected; and whilst it never got hot, it was pleasantly warm and ideal for a picnic. We headed off on the familiar route taking the cycle path through Silverknowes and Barnton to Cramond Brig. We paused there briefly wondering if this would be our first sweetie stop of the day. Alas, it was not to be. The leader sheepishly admitted he had committed the cardinal sin and forgotten to bring sweeties! We headed off, took the underpass beeath the A90 and headed out on the road past Craigiehall Army HQ. Verity kindly marked the junction where we turned off, for the benefit of following riders. Whilst there, an old lady stopped her car saying she had a puncture and would need to walk to a nearby house and phone the RAC. Without hesitation, Verity phoned the RAC on her mobile and was able to give the location. Speaking about it later, we had visions of the call handler looking out onto the horrendously busy M5/M6 junction near Birmingham whislt directing a mechanic to a quiet road near Kirkliston. Verity rejoined us and we made our way along the cycle path to Kirkliston. An unscheduled stop in the main street saw the leader disappear into a shop and emerge carrying a packet of sweets. He had redeemed himself. We made or way through the village, pausing for a comfort stop at the leisure centre where the sweeties were passed around. Quiet country roads near Niddry Castle led us onto the towpath beside the Union Canal for the run into Broxburn. Leaving the canal, a mixture of cycle paths and quiet residential streets allowed us to avaoid a section of the busy A899. Unfortunately, the path ended and a stretch on the busy road followed. We turned off and headed to Uphall station. Cycle paths took us around Pumpherston golf course before joining a path beside the River Almond. Some of the paths on this section were somewhat rough and bumpy; but they caused us no problems. We rode beneath the impressive Camps Viaduct. It made a change, as on previous rides we have always ridden across the viaduct. On the final run into Almondell Country Park, there were a couple of bridges that were far-from-easy to navigate as a rusult of steep lips of slippy steel - not what you would expect on a dedicated cycle path. We arrived at the visitor centre and bagged a couple of picnic tables in the garden for our picnic lunch. 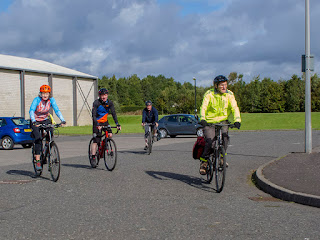 Lunch over, we made our way up a stiff little climb to exit the country park. A rough path followed by a minor road brought us out at a busy junction on the A71. We crossed carefully to join a much quieter road that took us to Kirknewton. On the stretch of road around Long Dalmahoy, the leader confidently led us past a "road closed" sign. Three cars were behind us as we arrived at another "road closed" sign and the road was blocked by a lorry and workmen filling in a trench. As the cars were forced to turn around, the workmen stopped and allowed us to squeeze through the gap between the lorry and the ditch. That explained why the sign had also said, "except for pedestrians and cyclists". We carried on and took the back way into the Heriot Watt University campus. Due to building work, there were several cycle paths closed within the campus; but fortunately, diversions were in place to help us get through. From there we followed a route we have used many times to enter the back of Edinburgh Park. From there on, the familiar route took us through Sighthill, Broomhouse and Stenhouse before following the tram line as far as Murrayfield. From there it was a short run to the Russell Road zig-zags, where the leader declared the ride over.
Thanks to Peter for leading the final Extra ride of the year. Everyone seemed to enjoy it, and it is always good to go somewhere familiar but have the route mixed up a little to keep it interesting. Courtesey of her good samaritan role, Verity gets a well-deserved mention in dispatches for the second week running. So here ends another successful series of Extra rides - role on next summer.