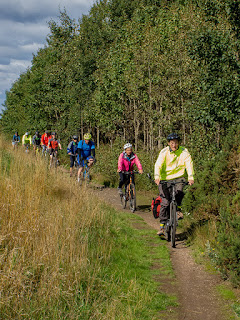 Over the last few years, late August has become synonymous with one of the group's Extra rides deep into East Lothian, with lunch taken at the Merryhatton Garden Centre. Our great friend and one of the group's true characters, the late Logan Strang always led this delightful ride. Just like last year (the year we lost him), today's leader felt more like he was caretaker on a ride that will always belong to Logan, rather than being the true leader. As seems to be the norm for this ride, we were blessed with lovely weather. Not quite as warm as it might have been, but bright and sunny for most of the ride and a slight breeze - perfect cycling weather.

Whilst it was bright and sunny, it was slightly cooler as we waited for all the riders to arrive at the Fisherrow meeting point. The temperature had risen a few degrees by the time the nineteen riders were ready to depart. The leader's briefing contained a few words about Logan, before tips about riding safely on the couple of busy roads that lie ahead, and details of the route and lunch stop. Briefing over, we rolled away from Fisherrow and headed for the footbridge across the River Esk. Down Goose Green and we stopped at the blue arrow beside the Air Cadets hut. This was the first of two educational stops on today's ride. The leader said a few words explaining how Second World War bomber crews used the arrow for guidance whilst practicing hitting targets in the Firth of Forth, and how it had been restored in recent years by the Air Cadets. Leaving the arrow behind, we followed the path beside the race course and carried on to Prestonpans where we joined the road. Just past the empty space where the Cockenzie power station used to stand, we took the quiet back roads past Cockenzie and Port Seton harbours. 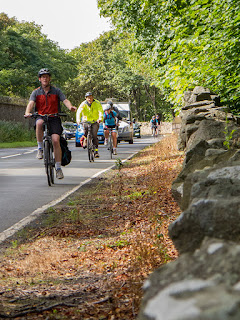 After following seafront cycle paths, we re-joined the road near the entrance to Port Seton caravan site. We took the quite busy coast road and as it swung inland after Gosford Bay, we pulled off the road for a sweetie and cake stop. A delightful little track through the woods took us to Aberlady; although some of the group opted to remain on the busy road. At Aberlady, we left the main road behind as a quiet residential road took us inland and away from the village. We emerged onto a quiet country road before turning off onto an even quieter country lane past Myreton Motor Museum. There followed a stretch on the busy B1377, before turning off onto a much more pleasant road at Drem railway station. A short time later saw us turning off into the Merryhatton Garden Centre - our lunch stop.

We often compliment Logan for discovering such a good lunch stop and building up a lovely ride around it. Once again it lived up to expectations and everyone seemed to enjoy their lunch. We began our return journey passing the East Fortune airfield runway and Scotland's National Museum of Flight. From there we made our way to the lovely village of Athelstaneford for our second educational stop of the day. The village is credited with being the home of the Scottish Saltire flag. We gathered round the information panel beside the church to read the story. One of the riders who had been there a number of times before, led a small group to go and view a two minute video on the subject in an outbuilding behind the church. Ten minutes later, the leader was dispatched to fetch them back so we could get moving again. Stragglers rounded up and we were on our way. Leaving the shelter of the village behind, we began to appreciate that we were heading into something of a headwind. It is not uncommon to encounter a headwind there that remains all the way back to Edinburgh, especially when returning along the coast road. Fortunately, that was not the case today. We passed the Hopetoun Monument before turning left on the A6137 towards Haddington. On a mainly flat route, this was our only real climb of the day. As the road flattened, we turned right on a quiet road that headed towards Longniddry. The group stretched out a little and an oversight by the leader meant a right turn was left without a rider marking it for those following. This resulted in several riders missing the turn and having to retrace their steps. 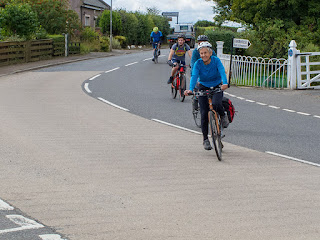 But once they made the turn, they were rewarded with a beautiful sweeping descent. Those waiting at the bottom could see how much those following had enjoyed it by the width of their grins! Regrouping, we headed off only to be accosted by a playful puppy who bounded out of a garden. It's doubtful he had seen so many bicycles before and obviously thought they were there to play with him. Eventually his owner managed to get a hand on his collar and we carried on our way. Taking the quiet lanes that ran paraellel with the railway, we bypassed Longniddry and arrived at a level crossing, We were delayed for several minutes as two trains went by. Once the barrier went up, we carefully crossed the A198 dual carriageway and joined the cycle path heading west. A lovely downhill stretch and we were in Port Seton. Taking the back roads past the two harbours, we retraced our outward route from the morning. As we approached Musselburgh, instead of following the path beside the race course, we rode through Levenhall Links Leisure Park and followed the path and sea wall back to the blue arrow at Goose Green. At the footbridge across the Esk, the leader declared the ride officially over. Some headed home whilst the remainder headed for post-ride coffee and ice cream at Luca's.

Lovely weather, a nice ride, good lunch stop and everyone seemed to have enjoyed themselves. What more could anyone ask for? We were all left feeling we had done Logan proud.