A March re-enactment; but without the freezing rain! 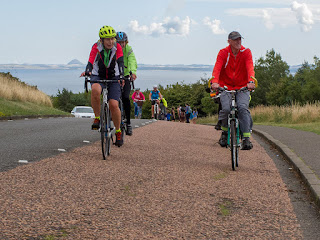 For today's 20 Milers outing the leader chose to do the same ride she led back in March. This is not
something the group usually does. But March's ride was blighted by some of the worst weather we have endured for quite some time - windy, freezing cold, continual heavy rain and the occasional blast of sleet. Perhaps not too surprising as it was just over a week after the Beast from the East had battered the country. It resulted in a low (but could easily have been considerably lower) turnout of just eleven riders. The weather contributed to two falls and a couple of riders abandoning before the end. It was clearly an interesting route; so this was take two. What a contrast! It was warm and it stayed dry. More overcast-bright than sunny, but no one seemed to mind. A turn out of 27 riders was very good, and great to see quite a few new faces in the mix. 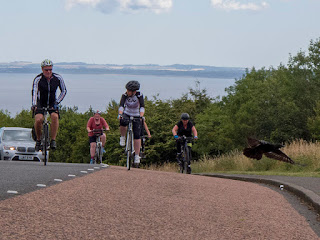 Following a detailed briefing where the group was made aware of the pre-arranged muster points, Jenny led us through the Festival crowds towards the Innocent Tunnel. But instead of going through the tunnel, we made our way into Holyrood Park and whizzed down Queen's Drive. Turning right at St Margaret's Loch, we climbed the steep hill up to Dunsapie Loch. On this section the group became quite stretched out and we had to contend with quite a few cars on the narrow road. We regrouped and were able to enjoy views of the loch and down to the Forth. Back in March we could barely see as far as the loch! Having circled Arthur's Seat, we returned to the point at which we had entered the park and headed to Duddingston village. We followed Duddingston Road West to the traffic lights at Milton Road. Road works to lay new gas mains meant we couldn't simply wait for the traffic lights to turn green and head across the junction. Instead we had to dismount, walk along the pavement and cross Milton road as pedestrians. We regrouped at the gate leading into Figgate Park. We paused briefly at Figgate Pond, before leaving the park and heading down Brighton Place. Just beyond the railway bridge, we turned right onto the Christian Path. This delightful little path was new to many of us, even those that thought they knew Portobello well. We crossed Portobello High Street and took quiet back roads to the Portobello Swim Centre, where we had a cake and sweetie stop. We made our way carefully through the crowds on Portobello prom and headed towards Seafield, where Peter gave us a brief history lesson on Portobello, telling us about the open air pool, zoo and the time an elephant was paraded through the town's streets. We pressed on alongside the Forth before heading on to Leith Links. A few twists and turns through the back streets of Leith and we found ourselves at The Shore. Past Victoria Quay, behind the converted warehouses and we emerged near Ocean Terminal. From there past Asda and Newhaven Harbour, along Lower Granton Road and onto Silverknowes Esplanade which we sped along to the Cramond Falls Cafe for lunch. 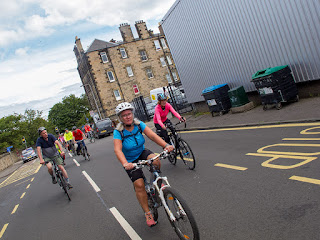 Following a pleasant lunch sitting in the cafe garden, we set off to make our way back to town; knowing it wouldn't take long as most of the mileage had been covered before lunch. Before anyone had got warmed up and back into the groove, we had the stiff little climb that is School Brae to contend with. The climb over, there followed a short stretch on Whitehouse Road before turning right down Peggy's Mill Road. This lovely little road took us down to join the River Almond Walkway. Many on the group hadn't been down there before and found it to be a real treat. The briefest of detours found us on The Old Toll Bridge at Cramond Brig, where we paused for a few minutes. Up Braepark Road, across Whitehouse Road and we were back on familiar territory. Through Barnton, paths took us back to Craighleith and onto the Roseburn Path, down the zig-zags, through the Telfer subway and along the canal to Leamington Bridge. Here the leader declared the ride over. Thanks to Jenny for leading an interesting ride. Despite visiting familiar locations, she kept it interesting with several unexpected twists and turns along the way. Also, a graphic illustration of what a difference the weather makes to the enjoyment of a ride. The only advantage to the March ride was hardly any pedestrians, children or dogs to steer round on the likes of Portobello or Silverknowes proms.

Nice write up. Thanks Glenn.
And thanks to all the cheery people who came on this ride.