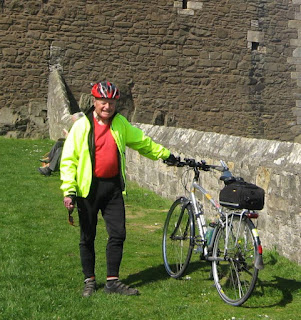 I am very sorry to report that one of our best-known and longest-standing members has died. George Strang - known to us all as Logan - suffered a heart attack while out cycling with three of our group in East Lothian on Saturday. He was 79.

Logan turned to cycling following the death of a daughter in 2004. Never one to sit at home or feel sorry for himself, he often said that cycling was what kept him sane. He had been a regular member of 20-Milers since 2007, and often led our rides. He also cycled with other local groups, and took part in several big charity rides including Pedal for Scotland and the Lepra St. Andrews run. A few years ago, he undertook a solo coast-to-coast bike ride from North Yorkshire to Iona.

Always keen to encourage new and less experienced cyclists, he was the driving force behind the setting up of EasyCycle in 2011, and ran the group almost single-handed until late 2015.

Logan was born in 1938, and attended Merchiston Castle school. After completing his National Service, part of which was spent in Cyprus, he became a science teacher, and taught for many years at George Watson's College. Always active and physically fit, he often took his pupils on sailing and skiing trips.

A few weeks ago, Logan was admitted to hospital for a minor operation. He was recovering well, and was soon back in the saddle. On Saturday, he joined three other members of our group for a ride to Humbie. Soon after the lunch stop, he collapsed by the side of the road. An ambulance was called and he was taken to the Infirmary, but was pronounced dead soon afterwards.

Despite some setbacks to his health in recent months, Logan repeatedly said that he would never give up cycling – and he never did. As one of our members put it, "If there can be any consolation at such a time, he passed away doing what he loved doing, with good friends, on a beautiful day. In typical fashion, he was cheerful to the end."

Funeral arrangements. A service will be held at St Peters Church, Falcon Avenue, Morningside at 1 pm on Wednesday 5th April. Family flowers only please, and no black. Retiring collection in aid of SCIAF.
Posted by Mike Lewis at 11:58