A March meander to Riccarton 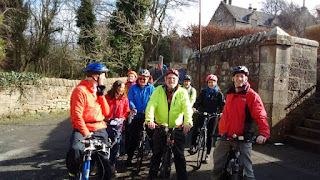 We had an excellent turnout for today's ride to Riccarton (I counted 28 but there might have been more), so leader Michael (Law) wisely decided to split us into two groups. Actually, it turned out to be three groups, but that was by accident rather than design; more about that in a moment.

Michael's group set out confidently and made it to the lunch venue without mishap. But before the second party was able to depart, that oh-so-familiar cry was heard: puncture! A couple of willing hands helped fix the problem, and before long the second group was on its way as well.

The unexpected closure of the canal towpath near Viewforth had forced us to make a hasty adjustment to our itinerary. Because of some uncertainty over the new route, the leadership of the second group was something of a joint effort involving Verity and myself. We were scarcely off the Meadows before we noticed that three members of the party were missing, including the backmarker and his deputy. (Was it not Oscar Wilde who said, "To lose one backmarker may be regarded as a misfortune; to lose both looks like carelessness." Well, maybe not.)

Rightly or wrongly, we made a decision to carry on without the three absentees. So we proceeded on our revised route down Whitehouse Loan, up Woodehouse Terrace and Braid Road to the Comiston Road traffic lights, and then into Braidburn Valley Park. There had been light drizzle at the start of the ride, but this was now giving way to clearer skies, giving us fine views of the Pentland Hills.

We followed the path beside the Braid Burn to Redford Road, then freewheeled down into Colinton, where we paused for a comfort break. Our route then took us up Woodhall Road, down West Mill Road and onto the Water of Leith path. A couple of miles later, we turned off the path and headed through Currie and into the back gate of the Heriot-Watt campus.

And so we reached our lunch venue, which was the spacious canteen in the university's main building. Considering the place is usually deserted on Saturdays, they offer a surprisingly good range of meals and snacks. As always the staff served us cheerfully and efficiently.

Michael's party had arrived about ten minutes before us, and left about ten minutes before our own departure. Just as we were getting ready to leave, who should arrive but the three riders that we had lost on the Meadows. It turned out that the person who had had the puncture at the start of the run had suffered the same fate again almost immediately afterwards. With no further inner tubes available, and with all attempts at patching the existing tube proving unsuccessful, the puncturee and the two helpers/backmarkers headed for the Edinburgh Bike Co-op for a new tube. The problem thus solved, the three made record time catching us up. But we had no desire to hang around while they gobbled their belated lunch, so we again set out without them.

For the return leg of the ride, we took a slightly devious route out of the campus (to avoid a running race which was taking place that afternoon). Then, after crossing the main Calder Road, we headed along Gogar Station Road and into Edinburgh Park, past the Gyle shopping centre and South Gyle station, and then along the familiar route through Corstorphine, Balgreen, Roseburn, and so back to the Meadows. The first group had made it back a few minutes before us. The three riders in the third group, having finished their hasty lunch at the campus, had made a bee-line back to town on the canal towpath, and arrived not long after the rest of us. Thus re-united, members of all three groups partook of refreshments while sitting in the warm sunshine outside Peter's Yard café.