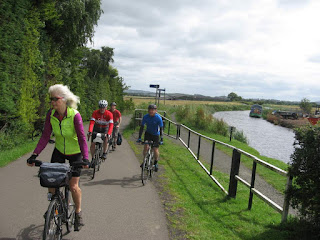 For today's Extra ride, Peter (Bennett) led us out to one of our more popular destinations: Almondell Country Park. This lovely wooded area is an excellent place for cycling, with many enticing paths criss-crossing the steep river valley. There is a friendly visitor centre which serves tea and coffee (albeit of the vending-machine variety), and most of the area is free of cars.

With about 20 riders in the party, we headed out along the familiar NCN 1 route from Craigleith to Cramond Brig, then on to the Carlowrie Road and the Kirkliston railway path. After a short comfort stop at the Kirkliston Leisure Centre, we continued westward on the back road to Niddry Castle and the Union Canal.

The only problem up to now was the fierce headwind, which made cycling somewhat harder than it should have been. But things got easier after we joined the canal towpath. As well as being more sheltered, we were now heading south, so the wind was from the side. What's more, we were pleasantly surprised to see that the towpath had been resurfaced since last year's visit, with firm tarmac replacing the rough gravel – at least for a couple of miles.

We left the canal shortly after Broxburn and rode into the park a mile or so later. The last time we were here, our lunch stop co-incided with a heavy shower and we had to take refuge in the visitor centre. That problem didn't arise today, as, apart from the wind, the weather stayed fine. We headed instead for the walled garden, where we spread out among the benches and picnic tables for our al fresco lunch. 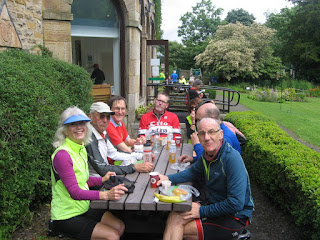 For the return ride to town, we set out along NCN 75. After passing Kirknewton, we enjoyed a couple of superb miles on Long Dalmahoy Road. With the wind now behind us, and a slight downhill gradient on a near traffic-free road, we glided along almost effortlessly. The final leg took us through the Heriot-Watt campus and Edinburgh Park, then by South Gyle and the Corstorphine railway path to Roseburn Park. At that point, some of the group took the Roseburn Path back to the starting point, while others went their separate ways. At just under 30 miles, it was another excellent day out.

Leader: Peter
Report and photos: Mike
Map: Sorry, no trace this time, but the route was very similar to last year's, which you can see here (with thanks to Julia).
Posted by Mike Lewis at 16:51