An evening ride to the foothills 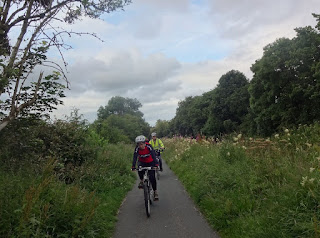 Tonight's evening ride started with a brisk spin along the canal towpath and the Water of Leith. We were about a dozen in the group, including one newcomer, as well as a visiting cyclist from Spain – both very welcome.

We left the path at Currie Kirk. At this point, and with memories of our recent Harlaw picnic in mind, I suggested that we tackle the long steep climb up the Kirkgate, but for some reason the group was unenthusiastic. So instead, we turned east through the hamlet of Blinkbonny (nice views over the Forth) and down the rough path to the Woodhall Riding School, then down Woodhall Road to Colinton.

For the next leg, we sauntered along the Braid Burn path, through Braidburn Valley Park and across Comiston Road. There was still a good half hour's daylight left at this point, so we decided to do an extra leg through the Hermitage of Braid. After emerging at Blackford Glen Road, we did a circuit of the King's Buildings. Then, as we headed west along Blackford Avenue, we were treated to a golden sky lit up by the setting sun. We arrived back at the Meadows, having pedalled 16 miles over two and half hours, with a fine evening all the way. A few of the group then went off to find liquid sustenance, while others made their weary way home.