Sunny Dunny lives up to its name


For the third annual 20 Milers weekend away, we headed east to Dunbar; the town that claims to be one of the sunniest in . There having been a shortage of sunshine so far this year, and a firmly held belief that the weather god's owed us big time after our wind-battered weekend to Peebles last year; many of us had been following the weather forecast with trepidation in the preceding days. Even in our wildest dreams, we could not have expected the weather to be as kind as it ended up being. That, linked with beautiful scenery, quiet roads and good company made for a very successful weekend.
﻿ 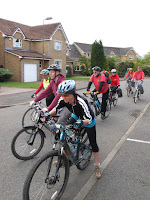 A very impressive turnout of eighteen riders assembled at our usual starting point. Not that long ago, such a turnout would have been commendable on a standard 20 Milers ride. A number of the riders were only intending to do the first day, returning to that evening by train, car or strategically concealed van. The leader gave a briefing and handed out encapsulated route cards - just in case. The long line of riders left the Meadows and snaked their way towards the Innocent Railway. From there we took the familiar route to Musselburgh station for our first sweetie stop of the day. Onwards to Whitecraig and on to the cycle path for Dalkeith. We left the path and made our way to Crossgatehall where we joined the Pencaitland Railway path. Riding on a surface of whin dust, we meandered through the delightful countryside for 6.5 miles. It is easy to forget that this used to be coal mining country. The sun was shining, it was pleasantly warm and there was blue sky in all directions. This was the life. We left the railway path behind. A deserted road took us to the delightful village of which is dominated by an impressive white church. Through we took the lovely quiet road to Gifford for a slightly late lunch stop. 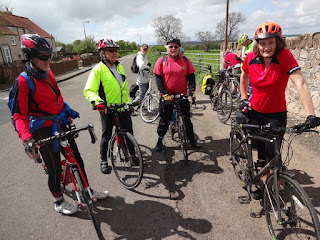 Some of the group decided to picnic outside the church (another white one), whilst the remainder went for lunch in one of Gifford's two pubs. Whilst waiting for those in the pub to finish, some of the picnickers went for a coffee in a cycle-friendly cafe that had opened for business that very morning. Definitely one to check out if you're ever in the area. We regrouped and prepared for the off. A wedding party tried to hurry us up as they didn't want us in the background of their wedding photos. We couldn't understand why that would be a problem. placated the ushers with Jelly Babies before we headed off. We never did get to see the bride. Why oh why does there so often have to be a steep climb staright after lunch? Instead of a nice flat bit of road to get back into the rhythm, we climbed steeply leaving Gifford behind. We turned off and headed towards Stenton on an almost deserted undulating road. Here we had to stop for what looked like being the day's first puncture. Fortunately, the tyre was pumped up, we were back on our way and it lasted all the way to . We then took a detour to visit the beautiful . It was well worth the detour as very few of the group had ever been there. We stopped beside the play park. Someone spotted a flying fox ride. Yes, you've guessed it, several members of the group just had to have a go. 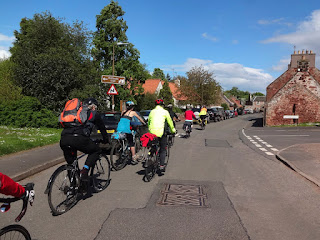 We left the village and took another steep climb to get back on the road to Stenton. This was an undulating road and we did meet more traffic. Don't ever believe anyone that tells you is flat! A quick pause to check the map in Stenton and off we went. On the route cards it said "Pitcox (by phonebox) turn right onto minor road". Phoneboxes may be hardly used these days, but as landmarks to help route-finding they are priceless. This road ran gently downhill until there, before us was the busy dual carriageway that is the A1 trunk road. We had to cross that to get to . Few of the group had read that far down their route card. The leader smiled knowingly and turned left through a gate signed "private farm access". This was also a recognised cycle / walking route. Another sweetie stop before making out way under a bridge that carried the A1. Who would have thought crossing such a fast, busy road could be so easy? We could clearly see and the sea. We were nearly there. We headed in what looked like the right direction to be confronted with a no through road. Turning round, a couple of locals pointed us in the right direction through a new housing estate. We were soon heading down a very quiet Dunbar High Street. It made sense when someone pointed out it was Scottish cup final day. We were looking for a pub for a post-ride beer. We retraced our route down the High Street and ended up in the hotel where a few of the group were staying. The fact it was a stones throw from the railway station was a bonus. Following a refreshing drink (or two) the riders began to head off and find their accommodation, lift or trains. Fifteen of us sat down to dinner in a restaurant close to the harbour and tucked into hearty food. It was a lovely end to a great day. Those that were staying headed back to their accommodation and the others headed for the station or the strategically concealed van. 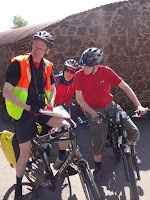 For day 2, ten of us gathered in the car park of the hotel where three of the group had been staying at 10 o’clock. It was already pleasantly warm as the sun shone down from a clear blue sky. Everyone was glad they had applied sun cream. For many, this was the first application of the year. Further applications would be necessary as the day wore on. Sunny Dunny was definitely living up to its reputation. Off we went to our first stop; a petrol station on the edge of town. One of the riders had a rucksack of clothes that he was sending back to , and this was the drop off point. The writer looked on enviously as he realised he had two panniers to ride home with and knew there were quite a few hills to climb. We left the petrol station and headed west through Belhaven and West Barns. 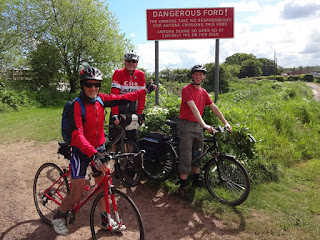 We were glad of the cycle / foot path beside the busy A199, just north of the even busier A1 dual carriageway. This took us to the A198 towards . That would have been the quickest way. But would have been quite busy and nothing like as lovely as the meandering route we were to take. Perhaps the leader was still half asleep; but he missed the left turn. We continued to a lay-by and stopped. A quick check of the map revealed the first wrong-slot of the weekend. Some of the group saw another left turn not far up the road and suggested we went and turned there. But the leader was adamant that we had to retrace our route back to the original turn to avoid deviating from the planned route, and thereby missing one of the gems of the ride. We made our way past the farm shop at Knowes and joined the . This led us to that gem – a less than shallow ford. Fortunately, there was an alternative route across the footbridge. Nevertheless, three brave souls rode through the ford. They reported it as being a bit slippery. But they all got through with nothing worse than wet socks. There then followed a few miles of beautiful back roads, some of which were quite steep. We then found ourselves whizzing down into town past North Berwick Law. Despite the rather indirect route we had taken, it was only 12 o’clock. 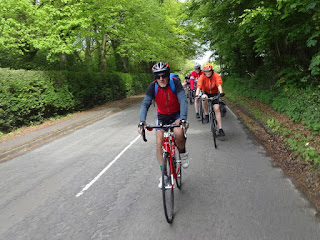 Following hearty breakfasts, no one felt ready for lunch. So we sat outside a pub and partook in coffee and ice creams instead. was heaving with visitors on such a glorious day. We picked up some food for a picnic and headed out of town on the busy A198. We turned off at Dirleton and made our way to the huge village green there. We enjoyed a leisurely picnic as the sun continued to shine down on us. We crossed the A198 and made our way inland on much quieter roads. It was now slightly cooler and there were grey skies not far away. Fortunately the darkest skies remained in the distance and we stayed dry. We carried on to Drem station, and after a short stretch on a busy road, we took the delightful quiet road past and on to Aberlady. We rejoined the busy coast road to be greeted by a noticeable headwind. We pushed on to Cockenzie where the group got split as some went to the harbour and others to the toilets. Half the group waited next to where the power station used to stand knowing the others would have to come that way. After a few minutes wait, we were back together and on familiar roads heading back towards . At Prestonpans we left the coast road and joined NCN 76 towards Musselburgh. At Levenhall Links there was a nature event on which meant there were many more people and cars than expected. So instead of heading into Musselburgh along the sea wall, we entered beside the race course. Then the shout went up, “puncture!” The first one of the weekend, and so close to home. It was soon fixed. We crossed the river and made our way to via the promenade. At this point, the leader [who lives in the Honest Toun] bade farewell to the group and handed over the reins to another rider to lead them back to town.

So that was another 20 Milers weekend away ride over. We had been blessed with glorious weather. Not a drop of rain fell on us. The beautiful scenery had looked even better bathed in bright sun light. Yes, some of the climbs had been a bit challenging. But we had a great weekend that was enjoyed by all. Hopefully, those present will be talking about it for months to come. It will be remembered for very different reasons to last year’s brutal ride to Peebles. Now to start thinking about next year.