A castle and a chilly picnic 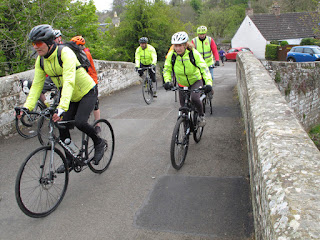 For the opening 20 Milers Extra ride of 2016 we headed out to Blackness Castle in west Lothian. A dry, cool but overcast day greeted the 19 rides that assembled at the Craigleith start point. It was good to see a few new faces mixed in amongst the regulars and more familiar participants. We made good progress as we headed west on the Blackhall path, through Silverknowes, Davidsons Mains and Barnton. We were soon having our obligitory halt on the bridge over the River Almond. From there we made our way on to the path beside the A90 and onwards to the village of Dalmeny. From there a mixture of paths and roads took us to South Queensferry for our comfort stop. We left South Queensferry behind and rode under the new Queensferry Crossing and into the Hopetoun Estate. In the estate there is one difficult to negotiate gate that is a real bottleneck for group rides. A new approach by the leader meant rather than wait until everyone was through, everyone went through and carried on. Such a simple approach avoided wasted time and will be the norm from now on. Just as we were leaving the estate, we suffered our only puncture of the day. It was agreed to push on to our lunch stop and leave the victim in the capable hands of our mechanical maestro, Alan Orr. 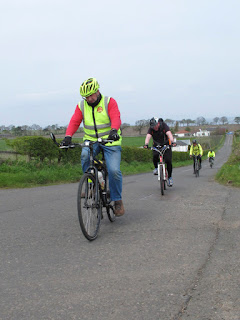 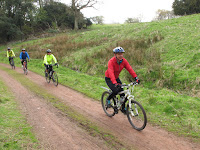 We arrived at Blackness Castle and looked for picnic tables and benches that would afford us some shelter from the cool wind blowing off the Forth. Some were successful in their search; others less so. The two held up by the puncture soon joined us. The small castle shop sold more teas and coffees than ice creams on this ocassion. It wasn't the weather to linger over a leisurely picnic, so we finished up and headed off. Within a few minutes we were warming up on the toughest climb of the day. We then made our way to Philipstoun where we joined the Union Canal. After a few miles on the bumpy towpath, we left the canal and made our way to Kirkliston. From there paths and back roads took us to the edge of the Dalmeny Estate and the path beside the A90. Again we stopped on the bridge over the River Almond where three children were busy playing Pooh Sticks. From there we returned to Craigleith on the route we had taken out earlier.

Thanks to Mike for leading the first 20 Milers Extra of the year. There will be more to come as the summer progresses. Lets hope we can have weather that feels more like summer.