An Extra ride into the depths of East Lothian 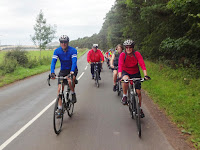 For the penultimate 20 Milers Extra ride of the year we headed deep into East Lothian to the Merryhatton Garden Centre. The weather was very kind to us, with the temperature perfect for cycling with a gentle breeze keeping it from getting too warm. A little more sunshine instead of grey skies would have been nice; but you can't have everything. Rain threatened a couple of times, but was considerate enough to only come when we were undercover at our lunch stop. 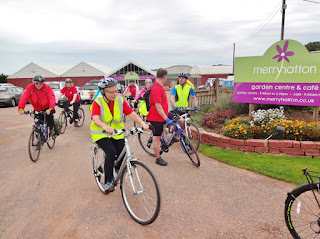 Uncharacteristically, there were two start points for today's ride. One at the Commonwealth Pool and one at Fisherrow Harbour. It was nice to see a couple of new faces amongst the 23 that rolled away from Fisherrow. This was an impressive turnout for an Extra ride. Usually the numbers are well down on those for regular 20 Milers rides; but not today. The leader decided to go with one group rather than two. A decision that worked admirably. After crossing the River Esk, we ground to a halt due to temporary traffic lights and roadworks on the main route out of the Honest Toun beside the racecourse. Leaving the roadworks behind, we made our way along the busy coast road. Beyond Gosford Bay, we left the main road to meander along the path between the trees that runs parallel to it. Its always nice to leave a busy main road behind, even if only for a short time. A short ride down Aberlady high street before turning off and heading inland. The group followed the leader as he confidently turned right on the road towards Haddington. This led to the exchange of a few quizzical glances between those that knew the area [and thought they knew the route]. Within a couple of hundred yards, the leader turned right into a campsite. Despite the suggestion that this was our overnight stop, the group turned round and headed back the way we had come, much to the confusion of those at the back. Wrong slot corrected, we headed down the quiet country lane past the Myreton Motor Museum which is well worth a visit if you're in the area. Another section of busy main road took us to Drem. Turning off and going past the railway station put us back on a much quieter road which took us to our lunch stop at the Merryhatton Garden Centre. We were all safely ensconced in the undercover dining area when a brief spell of heavy rain made its appearance. 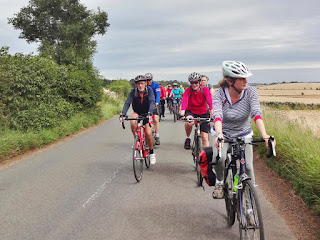 The rain had passed and it was slightly cooler as we made our way past the Museum of Flight at East Fortune. We passed through the charming village of Athelstaneford, the home of the Scottish Saltire. A few comments from the group made it clear that quite a few were in new and unexplored territory; and how lovely it was too. We passed the Hopetoun Monument and headed in the direction of Haddington, up the only serious climb of the day. A right turn, and we were back enjoying more quiet country lanes. A surprisingly quiet main road took us to Macmerry, where we joined an unsurfaced cycle track. We meandered on a few more quiet country lanes before running down into Tranent. Here we joined another cycle track and quiet road into Prestonpans. A comfort stop and then back on the coast road towards Musselburgh. At Tesco, the ride was declared over and riders began to head off, with the majority following the leader back towards Edinburgh.