A summer ride to Dalkeith 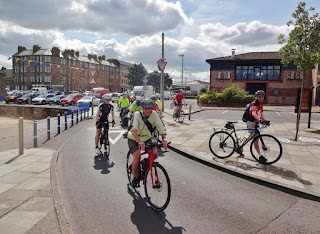 Following a spell of changable weather; today's ride was blessed with sun shining down from a lovely blue sky. The temperature may have been slightly below the average for the time of year, but it really was ideal cycling weather. A relatively low turnout of 25 riders was a touch disappointing. But it being holiday time for many and the start of the Edinburgh Festival may have had something to do with it. Despite that, it was nice to see more new faces. We headed off in one group. Road closures brought about by the Festival meant we headed off up [rather than down] Middle Meadow Walk and took a detour to get onto the road we needed. A short while later we stopped and waited upon realising that four riders were still at the start point. A minor mechanical issue had delayed their start. It was quickly fixed and they caught us up. There was much more traffic on the road than usual and this delayed us for the early part of the ride. Leaving the traffic behind, we took back streets and paths to make our way into Holyrood Park. Despite quite a few pedestrians to contend with, we were soon climbing Queen's Drive. Turning off half way up the hill, we took a path and climbed a few steps to emerge in the back streets of Willowbrae. We whizzed down to the busy Willowbrae Road. A fortunate break in the traffic meant all of the group managed to get across in one go. We made our way to Northfield, where a few quiet roads led us into the delightful Figgate Park. Once through the park, we were soon navigating the bumpy cobbles of Brighton Place on our way into Portobello. A couple of twists and turns and we were on the busy Portobello Promenade. One rider commented that on a day like today, we could have been beside the Mediterranean. We must remember that when riding along it in January, freezing cold and being lashed by horizontal sleet. Once at Joppa, there was no alternative but to join the busy Musselburgh Road for the run to Fisherrow Harbour where we had a comfort stop. 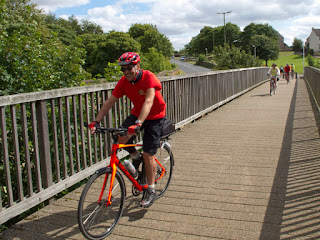 From there we took a less familiar route through Musselburgh to join the Grove near Tesco for our run towards Whitecraig. At Whitecraig we joined the busy A6094 to reach the outskirts of Dalkeith. More twiddling through unfamiliar back streets brought us to the lunchtime pub stop. A small number of the group availed themselves of the pub's facilities, whilst the rest of us headed to the park opposite Morrisons supermarket to enjoy a picnic in the sunshine. This finally felt what summer should be like. Suitably replenished, we regrouped and headed off towards more new cycle paths through a new housing estate. The paths were great, but a difficult-to-negotiate gate delayed us as 25 riders had to get through it. Not really what you'd expect on NCN 1. All through, and the unfamiliar paths led us back to Dalkeith High School and the familiar path towards Whitecraig. Yet another detour through an housing estate cut off a stretch of busy road and we were soon back on the path to Musselburgh. Instead of following it back into town, we turned off for Musselburgh railway station. From there we made our way through Newcriaghall and Brunstane to join the Innocent Railway to return to our starting point.

It had been a good day and the weather had been kind to us. Thanks to Michael for planning such an interesting route. Its always nice to be surprised by new ways through areas you think you know well.