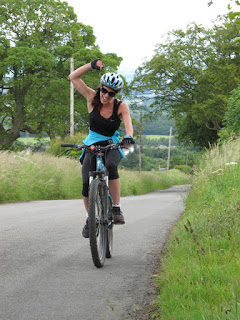 Heavy drizzle around 0800 suggested another typical summer day in Edinburgh was on the cards. Fortunately, by the time the 31 riders assembled at the start, it was merely grey skies and warmish but dry weather that greeted us. It was good to see some new faces as well as some riders who hadn't ridden with us for some time, in addition to the usual stalwarts of the group. Following a briefing from the leader, the two groups headed off along the familiar roads through Morningside. Before we had got as far as Braidburn Valley Park we had to wait whilst a wobbly wheel was investigated. This resulted in the rider heading off to the nearest bike shop. It looked as if their ride was over. But once fixed, they raced and caught the group and were able to complete the ride. Continuing on the cycle path through Colinton Mains Park and the housing estate near Redford Barracks, we made it to our comfort stop on Colinton Road where the first of the day's sweets were passed round. We pressed on leaving the city behind. We passed the impressive new riding school buildings on Woodhall Road before heading off road to Blinkbonny. Passing the cemetery we turned left into Kirkgate. This tough climb inevitably led the conversation (for those with any breath to spare) onto the subject of the Tour de France polkadot jersey for the King of the Mountains. We're not sure who got to the top first. But everyone made it and could feel a sense of achievement in having done so. From there it was a relatively short and easy run to the lunch stop at the Harlaw Reservoir Visitor Centre. We commandeered the picnic tables. A few riders took advantage of the catering caravan. The food was freshly cooked and very nice, but there was a long wait to get served. Former 20 Milers regular, Livia joined us with young Matthew and passed round some delicious wedding cake. Congratulations to Livia and Andrew (who was actually on the ride) on their recent marriage. 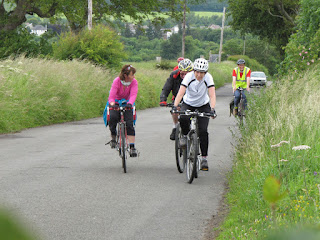 Suitably fed and watered, we bade farewell to Livia and young Matthew and began our journey back towards Edinburgh. We did a circuit of the Harlaw and Threipmure Reservoirs. After that it was downhill almost all the way home. A fast run down into Balerno was followed by a brisk run along the Water of Leith path. There is something about riding through the curved Colinton Tunnel that always makes the writer want to sing "We're all members of the self-preservation society"! We made it back to the Water of Leith Visitor Centre where the leader declared the ride officially over. Most of us enjoyed a well-earned coffee before making our way home in various directions. 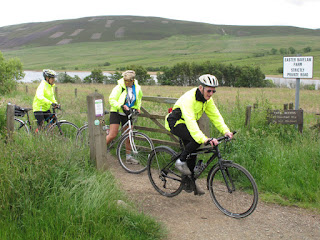 Fortunately the rain stayed off and we enjoyed reasonable weather for the ride and our picnic. Thanks to Mike for leading the run, and a big thanks to Dawn for leading the second group so well on her first time in that role. Looks like we have another leader to add to our roster for forthcoming rides.