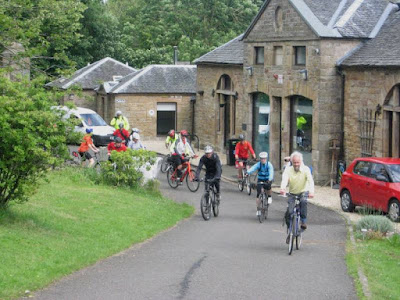 For today's ride - our second Extra of the summer - Peter (Bennett) led us on an interesting excursion into West Lothian. The day was tolerably warm and dry, but we had a fresh wind in our face for much of the morning.

About 18 of us set off from the Craigleith path junction. For the first few miles, the route was so familiar that our bikes could probably have found their way on their own: along NCN 1 to Cramond Brig, then via the Carlowrie Road to the Kirkliston railway path. On leaving Kirkliston, we paused at the leisure centre, which provided a handy comfort stop. Then came a short stretch on the main road, followed by a pleasant mile and a half on the back road to Niddry Castle.

We then joined the canal towpath for about three miles, apparently heading back to town, which seemed counter-intuitive. But this was the part of the canal that makes a big loop around three sides of Broxburn, so in fact we were heading more south than east. After leaving the towpath at Bridge 23 (no other place names shown on the map), we enjoyed a delightful stretch along a country lane which took us through the Strathbock and Kirkhill woods, and so through the north gate of Almondell Country Park. 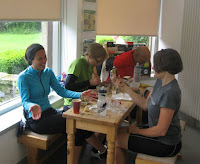 The country park is an excellent place for a bike ride. It has good paths and traffic-free roads, with dramatic views of the River Almond flowing through a deep wooded gorge. It was also our planned luch stop. But just as we arrived at the picnic tables - can you guess? - the sky darkened and some splodges of rain appeared. About a dozen of us headed for the shelter of the visitor centre. The friendly attendant allowed us to invade the centre's diminutive conservatory, where we somehow managed to squeeze around three tiny tables (with apologies to the family that was trying to enjoy their own quiet lunch there). However, a few moments later the rain stopped and the sky cleared, so some of us decamped to the centre's walled garden.

For the afternoon leg, we picked up NCN 75, which skirts East Calder and heads south east to Kirknewton and Long Dalmahoy. The wind was behind us now, and much of the route was slightly downhill, so we were making very good time. We paused for a few moments at a junction which is known in 20-Milers folklore as Yaz's Corner (after a memorable puncture there a year or so ago; I'll say no more). At the point where NCN 75 turns right for a long climb to Balerno, our leader wisely took us straight ahead on a gentler gradient towards the Curriehill road. 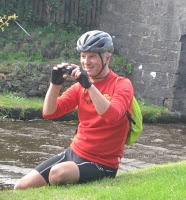 We ended the ride by pedalling through the Riccarton campus, Edinburgh Park, the Gyle and Corstorphine. By the time we reached Roseburn, several riders had peeled off. The rest of us took the Roseburn Path back to our starting point. At 30 miles, it was a very enjoyable ride.


Leader: Peter
Report and photos:Mike
Map trace: Sorry - didn't do one this time.