A windy weekend ride to Peebles


The second annual 20 Milers weekend away ride saw 13 riders gather on a cool, damp and breezy morning that felt more like March than May. Someone once said May is the best month of the year if you're after good weather in Scotland. There was a theory to test. The leader handed out encapsulated (oh ye of little faith) route cards, gave the customary briefing and we were off. 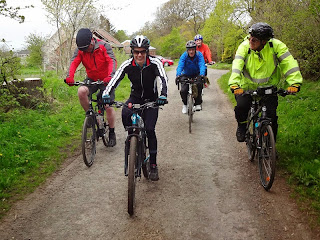 Taking the familiar route of the Innocent Railway, we soon left Edinburgh behind. At this stage, none of us questioned whether we would ever see it again - such thoughts would come later! We passed Musselburgh station on our way to Whitecraig and the cycle path to Dalkeith. We threaded through the streets of Dalkeith and made a comfort stop at the Tesco superstore. At this point Mike (who was never intending to do the whole ride) left us to return to Edinburgh. We made our way through the store car park to cross the bridge over the busy A7 and onto the cycle path towards Rosewell. There we left the path and rode down the high street before taking an unsurfaced track towards the small village of Carrington. Plans of a picnic lunch in the village were abandoned as it began to rain heavily. We pushed on down a deserted road towards the delightful village of Temple. After climbing the main street, just after the last house in the village we found a large open space with stacks of timber. The sun was now shining and it was pleasantly warm. So, here we had our picnic lunch slightly later than planned. But we still had many miles ahead of us. 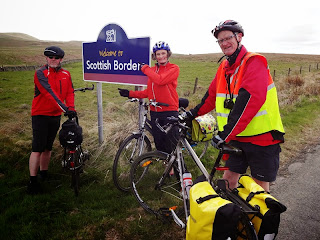 After waking Logan from his post-lunch nap we set off again. Very soon we were battling into a strong headwind and hoping it would soon ease. If anything it got stronger and just to add to the joy showers of rain and hail were mixed in! This part of the ride was seriously hard work as proved by the need to pedal to go downhill! On reaching the top edge of Gladhouse Reservoir, we paused to regroup as we were now very stretched out thanks to the battering winds. Where we had stopped, the wind dropped. As we recovered and passed around sweeties, we began to hope this may be the respite we hoped for. Within twenty yards of setting off, we realised that had been wishful thinking. The wind continued to batter us. This really was hard work. With few having much strength left, we turned off onto a track to be confronted by a locked gate. There was no alternative. All twelve bicycles had to be lifted over. As we made our way towards Portmore Loch, the wind finally eased. There were now smiles on faces that hadn't been there for miles. In addition to the easing of the wind, we had the bonus of riding through the beautiful Portmore Estate. Past the walled garden and the big house we came out in the village of Eddleston. The route through the estate meant we only had to ride 50 yards on the busy A703 before turning right to head down the Meldons. The wind returned to make this hard going. But the scenery was stunning and most of the group had never been there before. On a warm and calm day it would be breathtaking for a different reason.

On reaching the busy A72 into Peebles the leader gave the group a choice of two routes into town. After such attrition, it wasn't surprising that ten opted for the more direct route along the main road whilst only three agreed to stick to the planned route. A trouble free run saw the group of ten quickly get into town. The intrpid three now headed on the more scenic, but longer route. Only at this point did the leader admit he wasn't totally sure of the route! A promising start led through some lovely countryside. But it all went wrong when they arrived at the main road they had been trying to avoid. Damn! If it wasn't for tiredness, the fact that time was getting on and the allure of the pub there may have been some retracing of steps and serious studying of maps. Instead it was a case of, "stuff it! We'll take the main road." The group met up again in the pub for a well-deserved post-ride pint before heading off to find their accomodation. Was there ever a harder earned beer? Following the luxury of a shower and change of clothes, we all met up for a lovely pub meal to round off what many were claiming to be their toughest day on a bike ever! We had ridden 43 miles, but for most of us it felt like 20 more. 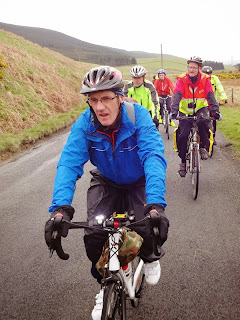 After a good night's sleep and a hearty breakfast the remaining 9 riders (two had only ever intended doing the first day and two pulled out injured after such a punishing day) met outside Sainsburys on a cool and damp Sunday morning to start the ride back to Edinburgh. With food for a lunchtime picnic, we rolled out of town on the quiet backroad towards Traquair. It was quite wet along this stretch. Near Cardrona we met up with Richard, a good friend of the leader. Thanks to his local knowledge, he soon had us on the quite new and very nice Tweed Cycleway path which we took into Innerleithen. Although it remained cool and showery, some of the group had to stop for a Caldwells ice cream at the shop in the high street. Carry on along the high street, turn left, a flat section as far as the golf course and then the climbing of the Granites began. Waiting to regroup by the golf course and entrance to a montain bike route, we were asked with a grin if we fancied doing a couple of circuits! In the interests of self-preservation, we declined. We began the long slog up the Granites. A long hard slog is the best way to describe it with some steeper and less steep sections. Despite the dampness, we all began to feel warm. Just as anyone may have considered shedding a layer, a shower would come down and a cold wind blow to change their mind. The group stretched out as we climbed. We were passed by many road bike riders. For those of us used to riding in Edinburgh, it was quite a surprise to receive a cheery greeting from them. They may have been fast, but they didn't have luggage like we did. As we climbed towards the top, Richard, who had an appointment with a paint brush had to leave us and head back down. Not long after that, we found a corner on the road with a layby and some shelter where we had our lunch. We didn't loiter as it wasn't warm despite the shelter. We carried on to the top. After that the road began drop down. After so long spent climbing, a deserted sweeping downhill road was glorious. The leader stretched his legs and hit 38 mph on this stretch. For a few minutes he forgot he was leading a 20 Milers weekend ride to Peebles and was on his way to victory in the Isle of Man TT! 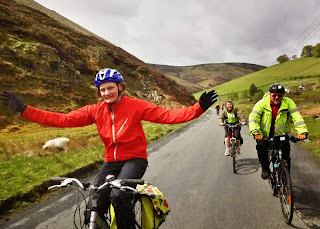 The wind returned with a vengence as we struggled into the village of Middleton. At least the snow gate there was open. A delightful rural underpass svaed us having to cross the busy A7. On towards Borthwick and Crichton we hit the toughest climbs of the weekend. Fortunately the wind didn't join in to make it even harder. On this section we crossed a bridge over the soon-to-be-open Borders Railway. We pressed on to Pathhead where we crossed the busy A68 quite easily. As we were about to start our final climb of the day up to Cousland, we realised we had lost Michael. He had stopped to take a photo and missed the turning. A phone call saved the day. But he had made rapid progress in the wrong direction. So we had to wait a while as he retraced his steps. The final climb over, we got back on the cycle path to Whitecraig and headed back to Musselburgh the same way we had left some 28 hours earlier. Riders began to head for home after this with the leader handing over the reins to those heading back into Edinburgh. Those returning to Edinburgh had clocked up 52 miles, some 6 more than those who finished in Musselburgh.

So there ended the second annual 20 Milers weekend away ride. A thoroughly enjoyable trip that had been made more challenging by the weather conditions. For those that completed the first day or [especially for those] that completed both, give yourself a big pat on the back for completing ninety-five challenging miles. Where to next year?