A sunny (at last) Extra ride to Blackness Castle 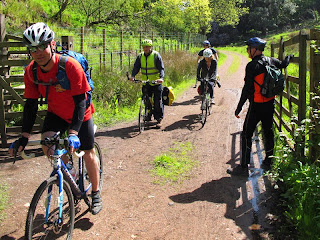 For the opening 20 Milers Extra ride of the year we headed out to Blackness Castle via the John Muir Way. This followed the same route we took for last year's John Muir Way inaugural ride. On that ocassion we had a cool, but mainly dry day. This year we were blessed with a warm and sunny day; one of the best of the year so far.

The Extra rides usually have a lower turnout than the main 20 milers. The lovely weather obviously helped as an impressive 30 riders assembled at the Criagleith meeting point. It was great to see some newcomers in amongst the familiar faces. Lets hope they enjoyed the ride and will return. Opting to keep in one group, we headed off along the familiar NCN 1 route through Barnton before making our customary stop on the Old Toll Bridge at Cramond. We then pressed on to South Queensferry for a comfort stop at the Co-op. From there we followed the shore and made our way into the Hopetoun Estate. The views of the existing road and rail bridges, the new Forth crossing and the Forth itself were stunning bathed in bright sunlight with a backdrop of blue sky. Today these views were in vivid colour. So often they seem to be available only in monochrome. This led us on to our lunch stop at the impressive Blackness Castle. There was a minor diversion on the way to lunch when two of the group nipped into a deserted children's playpark to have a shot on a rocking horse they remembered from their childhoods. 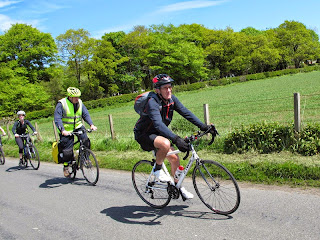 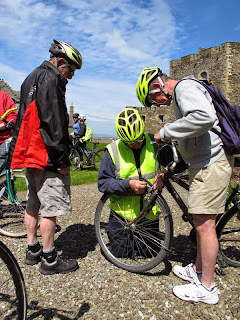 We spread out across a number of picnic tables beside the castle. How nice to enjoy a picnic lunch in the warm sunshine for a change. Our departure was delayed whilst one of the rider's needed to have their brakes repaired. Some wag suggeted they wouldn't need their brakes for a while as the first section after lunch was uphill. This was certainly the case as two quite stiff climbs greeted us as we hit the road again. We made our way to Philipstoun where we climbed up to join the Union Canal. We followed the towpath for four miles, before leaving the canal at Niddrie Castle. Quiet roads, paths and a stretch of main road took us to Kirkliston from where we returned to the Old Toll Bridge at Cramond. A brief stop to admire the River Almond in the sunlight, before retracing our steps back to the start point at Criagleith.