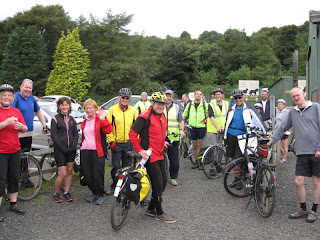 Our August run started as usual from the top of Middle Meadow walk, where we assembled on a rather overcast day with a cool westerly breeze .

After a briefing by the leader, we headed across the Meadows where we decided to split into two groups (there were thirty of us). The route took us through Bruntsfield and Merchiston to join the Slateford Road, thus avoiding a section of the canal .

We re-assembled just before the canal and attended to a flat tyre using a very nifty foot pump owned by one of the group. We then proceeded along the canal as far as Gogar Station Road. A quick swoosh down to the Gogar Bridge took us over the A8. We had a brief pause at a tram stop; this seemed to be miles from nowhere in particular, but had very handy bike racks. There was no sign of the trams, despite our leader lying across the tracks to provoke them into making an appearance.

We continued along a good path past the Gogar roundabout, admiring the large hole in the ground into which the trams will eventually disappear. We then turned into Turnhouse Road and Craigs Road, and scooted down Cammo Walk to Grotto Bridge - a little piece of the Highlands in Edinburgh.

After a short distance we took the tunnel under the A90 to reach the NCN1 path and the Kirkliston road. This allowed us to ascend the hill to Craigie Farm, which we all managed to cycle in one fashion or another. The restaurant provided all that was required, and coped with the sudden influx of thirty cyclists.

Our return journey took us over the A90 to join NCN1 again, which we followed all the way back to the three-way junction at Craigleith. The tail-ender had a puncture, but fortunately he had his own support team with him. A number of the assembled company retired for coffee and to put the cycling world to rights.

Many thanks to Julia, Claire, Lynne, Jim Martin and others for their help in keeping the group going in more or less the same direction, and to all who turned up.