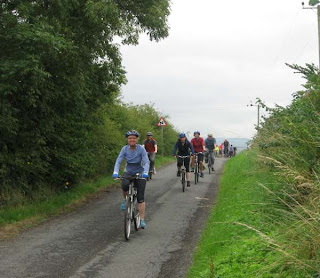 For today's Extra ride, we made a sortie into East Lothian. Logan led about 22 of us on a route similar to the one that he took us on in June last year. This consisted of mix of bike paths, forest tracks and quiet roads, which together offered some particularly pleasant cycling.

Not everything went according to plan. After leaving Macmerry, we found that the path we had intended to take was closed for maintenance. Rather unhelpfully, the sign instructed us simply to "use an alternative route" without giving any guidance as to what that route might be or how to find it. But our leader was on top of the situation, and we were able to quickly by-pass the problem area, at the cost of only an extra mile or so.

In addition, we had two punctures (same bike, same wheel), as well as a couple of other mechanical problems involving chains and gears. The last of these resulted in the cyclist in question, plus a couple of others who has stopped to help him, getting separated from the main group. Fortunately, we were able to re-connect after a couple of quick phone calls.

These were minor hiccups in an otherwise splendid day. The highlight was the lunch stop at the Coalgate Bar in Ormiston. On our last visit, I described this pub as one of the most welcoming of all our regular lunch venues. Nothing happed this time to change my opinion. The friendly staff again arranged for us to park our bikes in the courtyard, then opened up an eating area for us, where platters of sandwiches and sausage rolls, and large pots of tea and coffee, were waiting, all compliments of the house. What a difference from certain other eateries that we've used in the past. 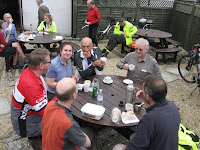 The weather was also kind. The morning was overcast, but it brightened up in time for the lunch stop, with only a very slight breeze in our face in the afternoon.

So, all in all, another successful ride. Thanks to Logan for leading it, and to Alan Orr and others for their help with the various mechanical problems. We have one more Extra this year, on 5th October, for which I'll post more details here nearer the time.

Hi Mike! Hope to make the next ride. I'm pleased to report I have fitted new tubes and puncture-resistant tyres so I really hope not to be the fellow who holds people up with punctures for a while! I have a couple of spare tubes too now! See you then, I hope. Iain