Return of the Extras 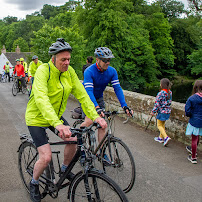 The last 20 Milers Extra ride was back in September 2019. After a gap of nearly three years, it was great to be back. Some riders that joined the group a few months prior to lockdown had never ridden an Extra before. Today saw us head out to the popular destination of Almondell Country Park near Livingston.

It was pleasant, rather than warm and quite breezy as fourteen riders mustered at the Craigleith junction meeting point. Briefing over, we headed off towards Silverknowes. Our familiar heading-west-route took us through Barnton and onwards to Cramond Brig, where we took our customary pause for a few minutes. The cycle path beside the A90 took us to Burnshot Bridge and along the road to Kirkliston. As ever, we left this road and made our way onto the much nicer railway path to Kirkliston. Following a comfort stop at the sports centre, a quiet back road took us towards Niddry Castle where we joined the Union Canal towpath. After three miles on the towpath, at Broxburn we left the canal behind and took the road to Almondell Country Park where we enjoyed a picnic lunch in the garden behind the visitor centre. 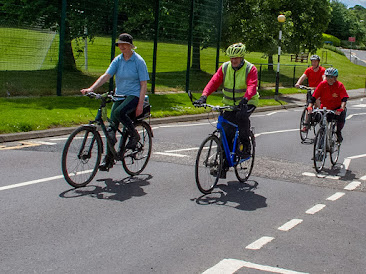 After taking lunch sitting in the warm garden, what better to get the group moving again than a short, sharp climb to exit the park. The NCN75 path was closed due to building works. As a result, we had to take a detour onto a busy main road for a mile. Back on the planned route, and we arrived in Kirknewton which was full of visitors enjoying gala day. Via Dalmahoy we took the back exit into Heriot-Watt University. Through the campus, we were soon on a familiar route home via the Gyle, Broomhouse, Murrayfield, Dalry, the Telfer subway and Fountain Park. Thanks to the Edinburgh Canal Festival and Raft Race, we had to dismount and wheel our bikes through the crowds. At the Leamington bridge, the leader declared the ride officially over.

Everyone enjoyed the ride, the weather had been reasonably kind to us with it being less breezy in the afternoon, and it had been a trouble-free day. Thanks to Mike for leading and kicking off the first Extra ride of the year.