This was our tenth Christmas morning ride. The first one was in 2011 and attracted just seven riders. Today, 15 cyclists turned up. So we are clearly moving in the right direction. In fact, 15 was a particularly satisfactory number considering today's conditions: a bright, sunny morning, but a bitterly cold one. The temperature was 3°C, but the freezing wind made it feel several degrees colder. 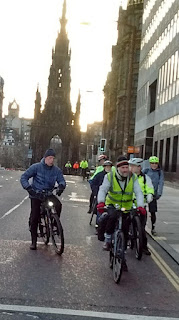 Our first stop was the esplanade of Edinburgh Castle, where we took in the excellent views towards the Pentland Hills. We then zoomed down the Mound, then did a two-way stretch along Princes Street: first heading west as far as Castle Street, then doubling back to South St David Street. On passing the deserted Christmas Market, one rider asked if Edinburgh was the only city where the Christmas market closes for Christmas.

The next leg took us westward again, this time along George Street, passing the seasonal ice rink (also closed) and into Charlotte Square. Part of the rationale of these festive rides is that there is much less traffic in the city centre on Christmas day, allowing us to cycle in places where we wouldn't normally venture. At least, that's the theory. But today there seemed to be far more cars on the road than expected. It wasn't clear why.

After cutting through to Queensferry Street, we headed down Belford Road into Dean Village. This was busy with tourists, all looking in vain for something to do or somewhere to go to get out of the cold. I couldn't help feeling sorry for them. Our route then took us along the delightful path that runs by the Water of Leith to Stockbridge. This was also quite busy, but perhaps less so than on a normal Saturday.

We continued along Deanhaugh Street and into St Bernard's Row before cutting through to Inverleith Park. We stopped for a quick refreshment break on the hill above the pond, from where there was a clear view over the city towards the Castle. It would have been nice to linger for a bit at this pleasant spot, but the thermometer was against us. So onward we pedalled, along Inverleith Row and into Warriston Gardens, from where we gained access to Quiet Route 13, aka the Goldenacre Path. 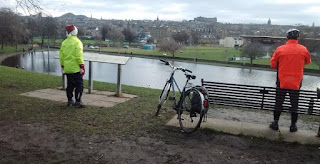 Leaving the path a short distance later, we continued through St Mark's Park and along McDonald Road. From here, our route was to take us across Leith Walk and into Brunswick Place, but the current tram works made the crossing of Leith Walk rather challenging, so instead we dismounted and walked the short distance along the pavement to Brunswick Street. This gave us easy access to Hillside Crescent and London Road.

The last leg took us along the cobbles of Royal Terrace and Regent Terrace. The original plan had been to finish the outing with an ascent of Calton Hill. But by now the temperature was taking its toll. Several members of the group had already peeled off, no doubt in search of somewhere to thaw out. Those that remained were questioning the wisdom of climbing to the 100-metre summit where 15 mph winds were likely to waiting for us. So, without any dissenting voices, the ride was officially declared over. Two of us made it back to the Meadows, with the others going their separate ways.