Dalkeith, this way - are you sure?


A frosty start gave way to chilly, but bright and sunny weather for today's ride to Dalkeith via a circuitous and unfamiliar route. The last few rides seem to have followed the pattern of a familiar destination being reached by a new and interesting route. Today's ride continued in that vein. The good weather linked with some lovely paths leading us through trees resplendent in their glorious autumn colours made for a great day to be out cycling. A great advert for keeping cycling despite the arrival of winter. 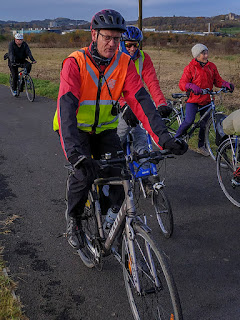 No doubt the weather played its part; but a turnout of 24 riders in November is quite impressive. Not quite enough to need two groups, which makes the logistics easier. It's always good to see some new faces mixed in amongst the long-standing regulars, and those that are becoming the new regulars. Following one of the shortest briefings in the history of the group, we headed off in the direction of the Innocent Tunnel. But on reaching the tunnel entrance, we swept past, squeezed past the barrier and found ourselves in the grounds of Edinburgh University's Pollock Halls. The ride had barely begun, but already many of us were somewhere we hadn't been before. Through the grounds and we emerged into the back streets of Prestonfield. Several twists and turns later and we were heading along Peffermill Road. We went into Craigmillar Castle Park, past the castle, across the road and along the new path in the area behind the Royal Infirmary. This brought us out on The Wisp. From there we made our way to Danderhall, crossed Old Dalkeith Road and through a door set into the wall, entered the Drum Estate. Through the lovely estate complete with trees wearing their autumn colours to emerge onto Gilmerton Road. We took to the path beside the road and headed towards Dobbies Garden Centre. We crossed several roundabouts to arrive at the one at Eskbank. We lost one rider and the backmarker at this stage. After a short while they reappeared having been delayed by a thrown chain. All together again, we continued and turned in to the grounds of Newbattle Abbey. After stopping to admire the big house, we continued through the grounds amongst more trees wearing their autumn colours. It was a bit muddy in places and the wet leaves were a little slippery, but it presented no real problems. We left the grounds through the kissing gate that always takes a while to negotiate with a large group. Through the housing estate and we were on the road that took us to the pub where we stopped for lunch. Three brave souls headed off to the park for a picnic whilst the remainder went into the warm pub. Except for a further three who had a mechanical issue to deal with first. 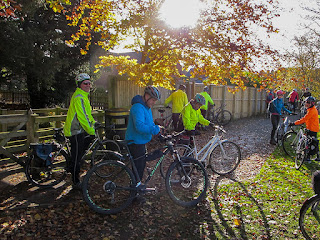 With lunch over and the three picnickers back with us, we should have been ready to roll. Unfortunately, fixing the issue with the chain had taken longer than expected and the three were just getting served their lunch as everyone else was ready to leave. It was decided that as the three could easily find their own way back, we would leave them to do so, thus avoiding delaying the whole group. So, with three less riders we made our way into Dalkeith Country Park. Past the grand Dalkeith Palace before pausing to admire the view from the bridge across the river. We retraced our steps and continued through the estate to emerge onto the busy A6094. A short spell on that road before we turned off to join the path down the Grove towards Musselburgh. Across the footbridge, along the path and road beside the golf course, across the main road out of Musselburgh and we were soon at the railway station. Here we were met by the three that we had left eating lunch in the pub. We took the path towards Newcraighall expecting to have trouble getting across the busy road there. Much to our delight, the road was so busy that the traffic was almost stationary and we got across easily. From there it was an easy and familiar route that took us back to the Meadows via the Innocent Railway.

Thanks to Graham for making this, his first ride as leader so successful. Everyone enjoyed the ride and it was good to reach a familiar destination by a new, interesting and unfamiliar route. Most of us could say we had been somewhere new today. Thanks also to Rob for fixing the problem with the rider's chain and allowing him to continue the ride. As the backmarker said, "it is good when someone has the right tools, and even better when they know how to use them".