The last 20 Milers Extra of the year signals the end of summer. Having a large turnout, lovely weather and a new route and destination enabled us to go out on a high. We headed out into a delightful, quiet and unexplored part of Midlothian with a lunch stop in Pathhead. Deserted country lanes, open countryside devoid of other people and the crossing of a shallow ford made for a great ride. 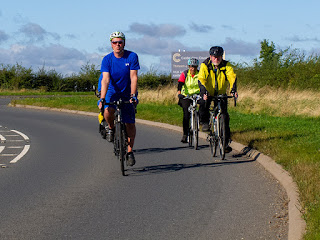 The weather forecast for today had been changing all week. At first it looked as if it would be dry, then light rain looked imminent. By last night, we were expecting a dry but cool day with overcast skies. That didn't sound too bad for late September. What we eventually got was a dry day with a light breeze, a comfortable temperature and sun shining down from a blue sky containing just a few fluffy white clouds. That doubtlessly helped muster the 26 riders that turned up to start from Fisherrow Harbour. The leader gave the cutomary briefing insisting that everyone would walk across the ford. Why? Because on the recce he had crashed heavily whilst crossing it and was very lucky to escape with nothing more than cuts and severe bruising. A good reason why we do recces and a good example of what a leader will do to ensure everyone's safety on the day. A willingness to "take one" for the group!. We're not sure if 26 is a record Extra turnout, but it's definitely close. The leader decided not to split into two groups, and that worked out OK. We made our way to the path for Whitecraig meadering through backstreets that were unfamiliar to most. From Whitecraig we joined the cycle path towards Dalkeith, turning off and climbing past the farm at Smeaton. More climbing followed as we headed towards Cousland and turned right on the A6124 towards the A68. With the climbing over [for now], we paused for a sweetie stop and to regroup. A glorious downhill followed to Fordel Dean before joining the A6093, which was far busier than usual. It was good to leave that road behind and follow a much quieter one to the sawmill at Windy Mains. Waiting to regroup, there was no doubt how the place had got its name. We were now on a lovely quiet lane heading towards the ford at Costerton, with a real sense of being out in the sticks. 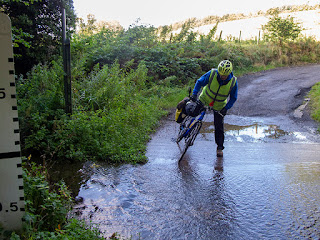 Arriving at the beautiful little ford, the leader stopped and led the group over the footbridge alongside. A few opted to walk through and a couple of riders just had to ride across - fortunately without incident. The leader allowed himself a wry smile at the thought of those riding slowly and carefully across compared to when he had approached at a fair pace on the racing line, only to have his front wheel slide from under him on the slippery surface. As the others headed away from the ford, he paused for a couple of minutes alone to exorcise the associated demons before pedalling after them. We were soon at the busy A68. Fortunately, we only had to travel 200 yards along it before turning off onto the much quieter B6458. With the sun shining down from a clear blue sky, no sign of human habitation and fields full of sheep - this was idyllic. More quiet roads took us from Tynehead to Crichton and back to the busy A68 at Pathhead. Rather than try and turn right onto such a busy road, we wheeled our bikes up the pavement to "The Foresters" pub for lunch. The food was good and we were all impressed with how they dealt with such a large group of hungry cyclists arriving unannounced. 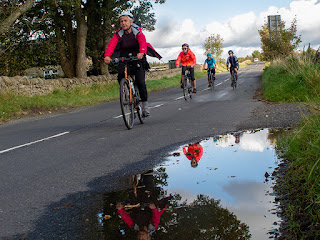 With everyone fed, we headed off leaving the busy A68 behind. Past the impressive gates leading to Preston Hall, we turned left and headed towards the A6093 that we had headed out on in the morning. This time, a quick left and right and we were on another of those delightful quiet lanes that characterised today's ride. Some more climbing and we were in the village of Cousland. We dropped down to join the A6124 which took us to Whitecraig and onto the River Esk Path. At the bridge across the river, the leader declared the ride over. Part of the group headed over the bridge and onwards to Edinburgh, whilst the remainder headed down to Luca's in Musselburgh for ice cream.

It's always good to hear people say how much they have enjoyed a ride, and plenty said that today. Somewhere new for most, lovely quiet roads, a real sense of being out in the sticks, wonderful scenery and great weather - a fitting finale to this year's series of Extra rides. They will start again in May next year. But of course, the usual 20 Milers rides will continue throughout the year - all welcome, free and no need to book.

Yes, great ride Glenn. Thanks for this - and all the others you have organised, led, reported and photographed this year. Really enjoyed them. Best regards, Graham