Are you sure this is the right way?

Earlier in the week the forecast was promising a day of thundery showers. By this morning it sounded somewhat better - a mixture of showers and light rain with thundery showers arriving after five o'clock. In the end, our ride to South Queensferry was blessed with warm sunshine, not a drop of rain and everyone was safely home by the time the thundery downpour did eventually arrive. We have a ride to South Queensferry every year, so there is always the risk of it becoming rather familiar and lacking in interest. Not this time; the leader did us proud by picking a route that none of us had taken before. We even got tangled up with a parade.

Despite the forecast, a turnout of 18 riders was quite good, with the added bonus that we didn't need to split into two groups. Good to see some new faces in the mix. The first part of the route was familiar until we arrived at Bruntsfield Place where we turned left and joined the main road. Those not paying attention almost went over the crossing and down to the canal. Instead, we meandered through the less familiar back streets of Bruntsfield, Merchiston and Polworth before arriving in Roseburn Park. More quiet paths and we emerged at the busy Glasgow Road. There was a little confusion as the leader had told us we would be crossing the road beside the Jaguar garage - which is now a Volvo garage. We left the busy road behind and threaded through more quiet back streets before emerging at the busy Queensferry Road. Across that and a quick whizz down Whitehouse Road, where we turned off and headed down to Cramond Bridge for the obligatory stop whilst cake and sweets were passed round. It was now warm and sunny. Heading out in the morning everyone was so busy ensuring they had got their waterproofs that no one had given a second thought to sun cream. We then took the path beside the road towards Burnshot Bridge. On arriving at the cattle grid at the entrance to the Dalmeny estate, we surprisingly went in rather than riding past and heading towards Dalmeny village. A cyclist coming out warned us to look out for a large highland cow standing in the middle of the road. Pre-warned, we were able to slow down and give the cow a wide berth. We rode through the estate and came into South Queensferry beneath the majestic Forth Rail Bridge. As we headed into town we came to a barrier and a "road closed" sign. It turned out to be the day of the Ferry Fair Festival parade. One of the stewards said we could head along the road so long as we dismounted and hurried up so as not to get tangled up in the parade. We made it to the centre of town and riders headed off in various directions in search of lunch. We'd never seen the place so busy. 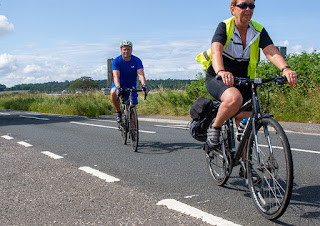 After lunch, we had a short walk wheeling our bikes to reach the end of the high street. From there it was up the hill, through the Co-op car park and we were on the path to Dalmeny village. We then took the familiar route back towards Cramond Bridge. Re-grouping at Burnshot Bridge, we were joined by a rather muddy French mountain biker who asked the best way back to Portobello. It appears he had got lost near Craigie's Farm and ended up riding across a potato field. We told him we were heading in the direction he needed to go, so he rode with us for a short while. He soon left us to go and seek out a jet wash for his bike and himself. We held with tradition and paused briefly on Cramond Bridge. From there it was onwards through Barnton with an easy crossing of Cramond Road South courtesy of temporary traffic lights. We had never before experienced such an easy crossing. Through Silverknowes and the Blackhall path took us to Craigleith. From there, the familiar route of the Roseburn path, Russell Road, Telfer subway and the canal took us back to the Meadows where the leader declared the ride over.

Thanks to Alan for leading an enjoyable ride. It just goes to show that with a little thought and imagination, what looks set to be a somewhat predictable and familiar ride can easily become something more interesting. Thanks also to the weather for being on our side. None of us expected to stay dry all day and be concerned about forgetting to apply sun cream.