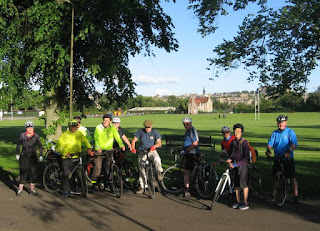 In choosing a route for this year's summer solstice ride, I claim no points for originality. After looking for inspiration in various maps, I decided we could do no better than repeat the very pleasant run that we had this time last year. And why not? It was an attractive route, with a good mix of water, greenery and views – too good not to do again.

Eleven of us gathered at our usual spot in Middle Meadow Walk. It was a lovely bright evening. We set off at 7 pm, heading west down Lauriston Place, past the Usher Hall and across Lothian Road to Festival Square. A bit more weaving took us through the West End. We crossed the Water of Leith by way of the Belford Road bridge, pedalled past the Scottish Gallery of Modern Art to Ravelston Dykes, then down Garscube Terrace to join the Roseburn Path at Coltbridge. 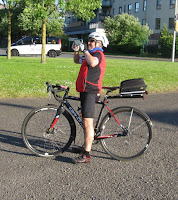 We stayed on the path only as far as the Craigleith path junction (familiar to most of us as the starting point for some of our Extra rides). We then freewheeled down Craigleith Hill Avenue into Inverleith Park. After pausing to admire the particularly nice view of the Edinburgh skyline in the evening light, we continued round the sides of the Royal Botanic Garden to rejoin the bike path at Goldenacre. A few moments later we were at Five Ways, and then on the Hawthornvale Path to Lindsay Road. We had a long-ish stop by the cruise liner terminal, where we could just about glimpse the Royal Yacht Britannia in the middle distance. It's a pity that the public can't get a closer view of this magnificent vessel other than by buying a ticket. (We might have got closer, but unfortunately the Ocean Terminal was in the way.)

The next leg took us along a stretch of the Leith waterfront and the Shore (sorry about the cobbles). We soon reached the Water of Leith path, with the river looking particularly peaceful in the evening light. We left the path at St Mark's Park, passing the site of the recently-demolished Powderhall refuse depot. And what an improvement there is to the landscape now that that unlovely building has gone (happily, the Grade B listed office building and former stables have survived and are being refurbished).

We continued along McDonald Road, across Leith Walk and on to London Road. We then followed Royal Terrace (more cobbles) and Regent Road to one of our traditional stopping points: the Stones of Scotland Monument. In the late evening sunshine, the view from here over Salisbury Crags and Arthur's Seat was particularly striking. We took advantage of the stop to share some nibbles. We then moved on to tackle the only noticeable climb of the evening: Calton Hill. 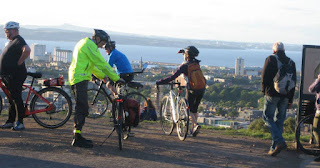 If you haven't been to the summit of Calton Hill recently, you may be agreeably surprised by the changes. The area around the Playfair observatory has been landscaped and remodelled, and although it is has been somewhat commercialised with the arrival of an up-market restaurant, it now provides better access to the south west side of the summit, with much more room to enjoy the views over the city.

And so to the final leg of our ride: down the hill to Waterloo Places, then left at the Bridges, right into Chambers Street, arriving back at the Meadows shortly before 9.30 pm. The weather had stayed kind to us all evening, and nobody had complained about the repetition of the route. Maybe next year we will do somewhere different. Or maybe not.