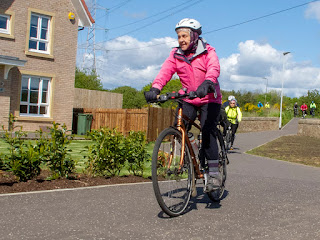 The question, "where is everyone?" summed up today's ride. It's late enough in the year for riders and bikes to have come out of winter hibernation; the sun was shining - we even got to eat lunch sitting outside in the pub beer garden and an interestingly different route was on the cards. But we still had a low turnout for a ride in May. Perhaps the fact that a couple of climbs and a reasonable amount of off-road riding lie ahead had kept some riders away. One rider was unfortunate to have a chain snap and one fell after hitting an hidden grate cover. The chain was repaired and the faller was shaken up, but uninjured. 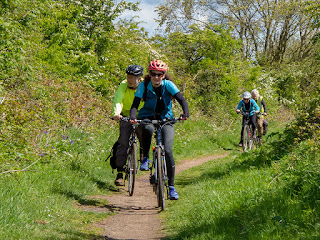 We only managed to muster eighteen riders. A few regulars were missing. But amongst those that did make the start, it was good to see some new faces, some we hadn't seen for a while and a couple of riders on electric bikes. At least we only needed one group; something that always makes the logistics easier. The familiar route via the Innocent Railway led us to Musselburgh station. We stopped a couple of times to regroup as we became spread out courtesy of road crossing points. Leaving the station we threaded through the Stoneybank estate. This was unfamiliar to most, but presented no problem for the leader, it being a stone's throw from home for him. The group emerged intact beside the more familiar River Esk. A duck beneath the low bridge that carries the main road into Musselburgh, along the road, across the River Esk on the footbridge and we were heading down Goose Green. A pause for a local history lesson about the blue arrow beside the Air Cadets hut and we were on the path towards the race course. On this occasion, we turned left before the BMX track and made our way up to the ash lagoons. As they are no longer used (since the demise of Port Seton power station), vegetation is reclaiming them and they look much more attractive than the other-worldly moonscape they used to be. A bit more easily manageable off-road riding and we were on the smooth path that runs parallel to the sea wall. Heading inland, disaster struck one unfortunate rider when their chain snapped. Such an occurrence can often be a ride-ender. Following a lengthy halt, the chain was repaired and we were rolling again thanks to the mechanical skills of Alan S. Onwards to Prestonpans for a welcome sweetie stop and comfort break. Up the hill and just before Prestonpans station, Mike gave us another local history lesson about Sir John Cope and the Battle of Prestonpans. We took the road bridge across the A1, before turning left onto a grassy track. The leader was looking for a small grate cover hidden by a clump of grass in the centre of the track that had nearly brought him down on the recce a couple of weeks earlier. As soon as he spotted it, he pointed it out, but the rider behind him clattered into it. Fortunately, the rider remained upright; but another was less fortunate and went down. Badly shaken, but uninjured they opted to abandon the ride. Having ensured they were OK to get back, and were not alone, the rest of the group carried on. We took the cycle path to the edge of Tranent and joined the road for the climb towards Elphinstone. It's not a steep climb, but it does drag on for a bit. Leaving the road behind, we headed onto a dirt track for the most substantial off-road section of the day. It was a bit rough and bumpy in parts, but it was dry and presented no real problems for the group. We were now at the top of Fa'side Hill. We had climbed a bit to get there; but that was very gentle compared to the hard way up - the route that we were about to take down. After a quick safety briefing from the leader, we were on our way down. As ever, the descent was glorious; more so since the recent resurfacing - no more potholes and loose slippery gravel to contend with. Big smiles all round suggested that everyone had enjoyed that. A short run along the main road and we were at our lunch stop. It was warm and sunny, so lunch was taken in the beer garden. 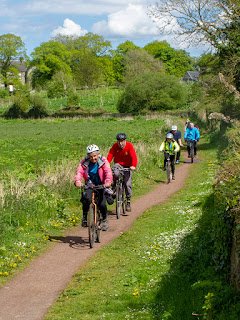 With everyone suitably replenished, we headed off towards Inveresk. A stretch of fast smooth off-road track and we were back beside the River Esk and the bridge carrying the East Coast main line. A footbridge got us across the Esk, through some housing estates on quiet roads and paths, and we were back at Musselburgh station. From there we headed back towards Edinburgh, retracing our route from earlier. But, by the Jewel, the leader led the group off in a different direction. Just to keep it interesting, we threaded through more back streets and headed towards Duddingston House. One final short off-road section, a run down the road and we re-joined the Innocent Railway to take us back to the Meadows. There the leader declared the ride officially over. Whilst it would have been good to have had an higher turnout, everyone seemed to enjoy their day. Most of the group had been to new places they hadn't been before, the weather had been kind to us, there had been a bit of drama - but nothing too serious. Overall - a good day's cycling. Everyone is welcome; there's no need to book - just turn up and have what should be an enjoyable day's cycling in good company. That's what the 20 Milers is all about. Finally, thanks to Alec for back marking for the first time.

Can supply map trace because I recorded route on GPS. Gpx file or jpg of route on OS 50000 scale map.

Thanks. Please email 20-Milers with that information (email address is in side panel).