Today's ride saw us head out to that old favourite, Craigie's Farm. It is usually a safe bet, even when there is a lot of  ice elsewhere. That's often an important factor, as for the last few years the first 20 Milers ride of the year seems to have been associated with cold and icy condition. Not so for the season opener of 2019. We were blessed with weather that was reasonably mild, if a touch breezy at times. There was some very light drizzle as we set off after lunch, but it was barely noticeable and came to nothing. 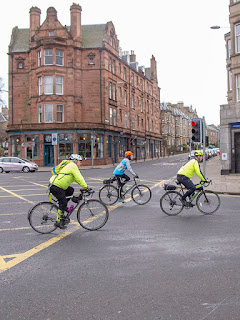 A turnout of 27 riders was impressive given the time of year. Clearly the unseasonably good weather played a part. As ever,  it was good to see some new faces in amongst the regulars. The decision was made to have just one group. We rode away from the Meadows and via Bruntsfield Links, Whitehouse Loan and the quiet backstreets of Morningside arrived at the busy Morningside Road by the clock. It took a while to get the whole group safely across the juction and onto Belhaven Terrace. The group pulled over to let an ambulance pass on Balcarres Street. We left the road behind and made our way through the woods to Craiglockhart Pond. Up a few steps and we were on Lockharton Avenue. We then joined the busy Colinton Road before turning right into Craiglockhart Road North, helped by a considerate motorist that let the whole group across in front of them. A combination of quiet roads and paths and we were on the canal towpath. We had a tight squeeze when the group had to pass three cyclists going in the opposite direction on the Slateford Aqueduct. We stayed beside the canal for quite a distance and the group became quite stretched out. This was when the decision was made to split into two groups. Something must have gone awry as we ended up with one group of twenty and another of just seven. We finally left the canal at Gogar Station Road and made our way to the Royal Bank of Scotland HQ. Across the bridge over the A8 and we were soon speeding down the bridge onto the cycle path beside the busy road. Just before Maybury Junction, we turned left onto Turnhouse Road. We often go a reasonable way along that road before turning off on the right. This time we followed the road as far as we could to the air cargo depot for Edinburgh Airport. We headed up Lennie Muir, which gave us good views of planes coming in to land at the airport. We turned off Cammo Road and onto a muddy track through the woods to emerge at Grotto Bridge where cakes were passed round. Leaving the River Almond behind, we made our way through the Craigiehall army housing and onto the road towards our lunch stop at Craigie's Farm. Up the stiff little climb and we were there. 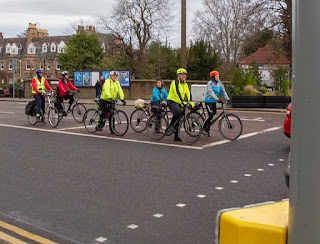 Following a pleasant lunch, the two groups headed down the steep hill towards the A90. The last three riders saw a car coming up the hill quite fast and decided to pull right off the road for safety. Despite the riders being well out of the way and causing no obstruction, there was a very expensive sounding "clang" as the approaching BMW made contact with the kerb. The car continued up the hill and the group continued down, along the road and joined the path beside the A90. We followed this familiar path back to Cramond Brig; for once, failing to stop on the bridge. Through Barnton and Davidson's Mains to join NCN 1 and on to Craigleith. From there, the Roseburn Path, Dalry, Fountainbridge and we were back at the Meadows and the ride was officially over.

Everyone seemed to enjoy the ride. There were no mishaps and the weather had been much kinder to us than we had the right to expect in mid-January. Thanks to Alan for leading such a good ride.