For those in the know, there are four routes to the top of Fa'side Hill near Wallyford. There's the hard way, second hardest way, third hardest way and the easy (off-road) way. Today saw us go up by the second hardest way, and come down what would have been the hard way; which made for a glorious descent. By declaring the ride officially over before we had returned to the Meadows (and five minutes before the rain started), the rookie leader was able to claim a dry ride. 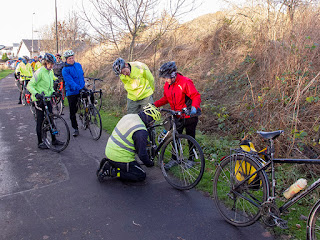 For once, the last 20 Milers ride of the year saw us avoid the Christmas crowds that we have had to mix with in previous years. This time, the Christmas tree in the pub where we had lunch was the only clue to what time of year it was. We didn't even have typical December weather. In the morning it was cool and dry with sunny intervals. After lunch, it was  overcast and cooler without the sun. For the final stretch back to the Meadows there was some very light rain - but of course, the ride was officially over by then. A turnout of twenty was good for the time of year. The noticable wind that blew us out to Prestonpans had dropped as we turned to head back west. In one group, we headed off towards the Innocent Railway. A trouble-free ride with the wind behind us meant we were in Niddrie in next to no time. Unfortunately, a wrecked pickup truck had been dumped in the middle of the cycle path. To avoid the broken glass and other debris, we had to take to the soft, wet grass. We also had a very brief delay whilst a minor chain-related mechanical issue was deftly sorted. On reaching Milton Road, we deviated from our usual route to Musselburgh and headed down Brunstane Road. The road was unbelievably busy with traffic. Eventually we got down it and made our way to Portobello prom. At Joppa, the leader had us get into groups of five so as to cause minimal hold ups to the traffic on the busy road towards Musselburgh. It felt like a team time trial, only considerably slower with the aim being NOT to catch the group in front! With that stretch of busy road behind us, we stopped at Fisherrow for a comfort break and cakes and sweets were passed round. 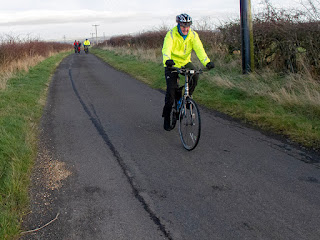 Quiet back roads, the footbridge over the river, past the racecourse and we were once again into groups of five and back on the busy road. At the racecourse roundabout we took the coast road as far as Prestonpans. We now headed inland towards Prestonpans railway station. Past the station and we crossed a bridge over the A1. A short, sharp little climb took us to the busy A199. It took a few minutes to get everyone safely across. Once across we began the steady climb up to Fa'side Hill. Inevitably, the group became quite spread out on this section, so we waited and re-grouped beside the mast. A few undulations, past Fa'side Castle and the steep descent began in earnest. Going down the other side of a steep hill climbed always gives a sense of fair payback. From the bottom of the hill, a short run along the busy road and we arrived at the pub which would be our lunch stop. Given the time of year, it didn't come as much of a surprise that no one opted for the picnic lunch option. 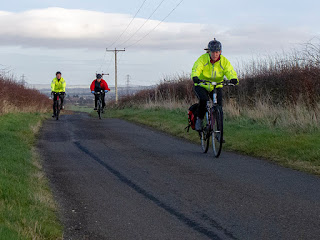 With everyone fed and watered, we stepped outside and prepared for the off. With clouds now obscuring the sun, it felt considerably cooler. Within yards of setting off, we were delayed by temporary traffic lights. Through those and we followed the road to re-join The Grove - the cycle path back towards Musselburgh. We followed it as far as the footbridge over the River Esk. Across the river and [unbelievably] we rode through a couple of swarms of midges! Didn't they know it was December? Clear of the midges, a combination of quiet residential streets and cycle paths took us to Musselburgh railway station. From there we made our way to Newcraighall; where we luckily hit upon a break in the traffic to cross the road unhindered. Through the new housing development and we were soon on the familiar route back towards the Innocent Railway. In Niddrie we avoided the wrecked truck by taking an alternative path. Once through the Innocent Tunnel, the leader declared the ride officially over. One or two riders left us there, but the majority followed the leader back to the Meadows through the light rain that was now falling.

Thanks to Neil for taking the reins for the first time to lead an interesting and enjoyable ride. Taking the decision to declare the ride over five minutes prior to the rain beginning was a stroke of genius. Also worthy of mention was the fact that Neil was out recceing the route at 0500 to check that the wind was not going to be a major problem. It wasn't. That must count as a level of dedication that few other leaders can match.

So, with the exception of the short Christmas Day ride, here endeth the 2018 rides. Thanks to everyone that has made them a success - leaders, backmarkers, helpers and attendees. Wishing all our riders seasons greetings and looking forward to seeing you again in 2019.