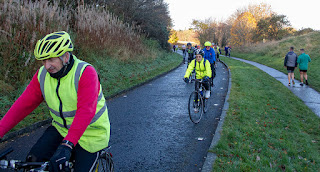 Today's ride saw us head to Dalkeith by a mainly familiar route with a couple of twists thrown in for good measure. For a large part of the outward route, we were squinting into a low winter sun; but we wouldn't dream of complaining about its welcome presence. There were a couple of delays - two minor mechanical issues and a rider fell whilst trying to avoid a dog that was not being kept under control. We also got caught up in a running event in Holyrood Park; which, as the leader pointed out, had not been there on the recce! 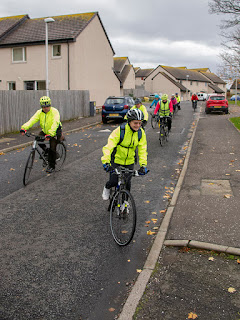 After a very low turn out for October's rain-lashed ride to Roslin, we were hoping for a considerably better turn out this time. A mild, sunny November day would surely lead to a respectable number? Yes. But no one was really expecting 30 starters at this time of the year. It is very unlikely we have had such a large turn out in November. Following some discussion, it was decided to risk running as one large group. Following the leader's [characteristically] in depth briefing, the large group of riders rolled away in the direction of the Innocent Tunnel. After crossing St Leonard's Street, some of the group sailed past the entrance to St Leonard's Lane and had to be shouted to stop and turn round. Despite some being on auto pilot heading for the Innocent Tunnel, the group were soon back on the right road. We headed down St Leonards Hill, past the mountain bike track and on into Holyrood Park. As we emerged onto Queen's Drive, something didn't seem quite right. For that time on a Saturday morning.....where was all the traffic? There wasn't any! At that point no one realised some of the roads in the park were closed due to a running event. Some riders took to the path as normal, whilst others took advantage of the road devoid of traffic. Taking care to avoid runners on the road, we made our way to St Margaret's Loch. Usually the climb on the road towards Dunsapie Loch involves mixing it with cars. Today it was runners we had to contend with. Leaving the runners behind, we made our way through a gate in the wall onto the quiet back streets of Willowbrae. Across the busy Willowbrae Road, through Northfield and Mountcastle before emerging onto Fishwives Causeway. From there we made our way onto Portobello Prom to Joppa. At the end of the prom, before taking to the road, the leader ensured we were in groups of six and spaced out sufficiently to travel safely along the main road to Musselburgh. Waiting to be flagged off, it felt as if we were in a team time trial - the difference being that being slow, not fast was the order of the day. We regrouped and had a comfort break/sweetie stop at Fiherrow Harbour. It was decided that such a large group was becoming unwieldy. So the decision to split into two groups was taken. We made our way to the Grove which would take us to Whitecraig. It was on this stretch, where we rode along squinting into the low sun that a rider fell whilst trying to avoid a dog that should have been kept under control. The unfortunate rider was rather shaken. But their cut knee was attended to, they took time to recompose themselves and were under way once again. It was on this section that the second group were delayed briefly whilst a gear cable-related mechanical issue was dealt with. Leaving Whitecraig, a short stretch on an unpleasant busy road followed. But we were soon riding through the quiet lanes of Dalkeith Country Park. Out into Dalkeith and we were soon at the pub that would be our lunch stop. A few brave souls headed to the nearby park for a picnic lunch. They reported it had been a pleasant experience sitting in the warm sunshine enjoying their sandwiches. 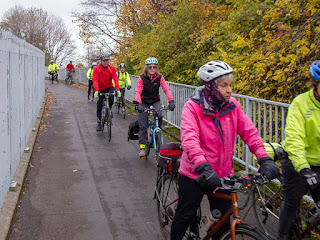 With everyone fed and watered, we began our journey back. Past Newbattle golf club, we turned into the new housing estate. A slight delay as everyone negotiated the kissing gate, and we were heading  through the woods. Another brief delay as we waited whilst a minor mechanical malady was fixed.  Through Waterfall Park and on to Dalkeith High School. From there we took the path towards Whitecraig, turned off through the housing estate and park to emerge in the village. From there, a brief ride down the high street, a right turn at the roundabout and we were back on the road to Cowpits where we joined the Grove to head back towards Musselburgh. Just before the railway bridge, we crossed the footbridge over the river and carried on to Musselburgh station. From there, we took the path to Newcraighall where we found the road awash with water which led to serious traffic delays. It didn't worry us as we cut through the new housing estate to join the familiar path which would lead us back onto the Innocent Railway for our run back into town.

A good day had been had by all, no doubt helped by weather that was far from what we would expect in November. Thanks to Verity for leading us on a familiar route with just enough interesting twists to keep us all on our toes.