Stepping up to Ratho 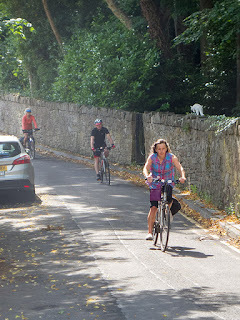 Blessed with yet another lovely summer's day we headed out to the Edinburgh International Climbing Arena at Ratho. We've been there a number of times; but today the leader managed to mix the route up a bit and we found ourselves on a few unfamiliar stretches. But the one downside to the lunch venue didn't change - we still had to get our bikes up and down a steep flight of steps.

A turnout of 25 riders was respectable; but given the weather, we might have expected more. At least it made life easier as we only needed one group. As ever, it was great to see new faces along with some we hadn't seen for a while. Standing in the warm sunshine, the leader gave the briefing which contained the wonderful line, "just because someone in front of you does something stupid, it doesn't mean you have to". Briefing over, we rode a few yards before everyone dismounted to walk past the roadworks which remain at the top of Middle Meadow Walk. we remounted and headed towards Bruntsfield Links. One rider who was clearly riding on autopilot went straight on at a crossing, rather than turning left onto Whitehouse Loan. Inevitably, those behind followed in the belief that he knew where he was going. Those at the back of the group were saved from making the same mistake. As they headed the right way, the backmarker raced off to round up the strays. With the strays successfully rounded up, we regrouped and continued. This is where we deviated from our usual route through this part of town. We went via Falcon Gardens, Falcon Road, Canaan Lane and Woodburn Terrace before re-joining our usual route through the back streets of Morningside and on into Braidburn Valley Park. We continued to follow the Braid Burn and on through Redford to our comfort stop in Colinton. From there we took Woodhall Road, turned down West Mill Road to join the Water of Leith walkway. Another deviation from the norm saw us leave walkway and head into a new housing estate. We climbed up to cross Lanark Road West with Muir Road taking us on through Riccarton. We passed the back entrance we usually take into the Heriot Watt University campus, instead turning right onto Boundary Road North. A path took us into the campus on roads that were very quiet on a Saturday. We crossed the busy Calder Road, from where Hermiston House Road took us onwards to join the canal. On this stretch, a fast cyclist appeared beside the writer and said, "I've passed four of you. how many more are there?" His face dropped as he was told he had another 21 to get past on the narrow towpath. But he looked relieved when told we would be stopping at the climbing centre shortly. We stopped at the bottom of the steps and he sped away. With a combination of wheeling and  carrying, all the bikes and riders were soon up the steps, including the recumbent trike which two had to carry up. 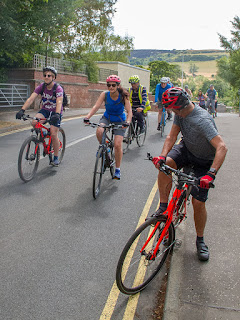 After a pleasant lunch sitting outside at the picnic tables, we once again tackled the steps before heading along the canal back towards town. On such a lovely day there was as much activity on the canal itself as on the towpath in the form of canoes, paddle boards and narrow boats. We followed the canal as far as Cutlins Road. The cycle path beside busy roads took us through Sighthill, Saughton and Stenhouse before we turned off to take the path beside the tram tracks. Onwards past Murrayfield Stadium and Roseburn Park, we took the familiar route to Leamington Bridge via Russell Road, the Telfer subway and Fountain Park. From there we returned to the Meadows via Leamington Terrace and Bruntsfield Links rather than the King's Theatre. At the Meadows, against a backdrop of the Anti-Trump rally, the leader declared the ride over. Thanks to Mike for leading us to a familiar destination, but keeping it interesting by deviating from the expected route.