A picnic high in the Pentlands 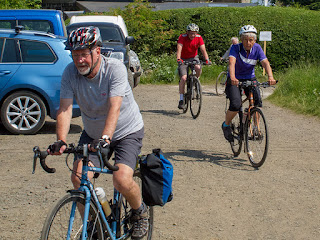 On a lovely warm summer's day we headed up into the Pentland Hills for a picnic lunch beside Harlaw Reservoir. There was a bit of climbing up past the lower reservoirs and some tracks were quite rough and stony, but the lovely weather and stunning views made it all worthwhile. Last month's leader, Dawn was on backmarker duty today. Following her pre-ride briefing last month, she received [an unheard of] round of applause. The same happened today when the leader announced she would be back marking.

A turnout of twenty-five riders was respectable; but given the lovely weather we might have expected
more. As ever, it was good to see some new faces in the mix. A few of our regulars were abscent;  they were off on a challenge to ride 100 miles in a day. The days where we could muster numbers in the high thirties seem to be gone. At least it meant we only needed one group today. Followimg the leader's briefing; for the second time in a month, we set off on foot wheeling our bikes past the roadworks on Middle Meadow Walk. Once clear, we mounted up and rode off towards Bruntsfield Links. From there, the back streets of Morningside took us to Braidburn Valley Park. Through the park, we continued to follow the Braid Burn and made our way through back roads in the Redford area, emerging on Redford Road. A short spell on that road and we turned left into Redford Drive. 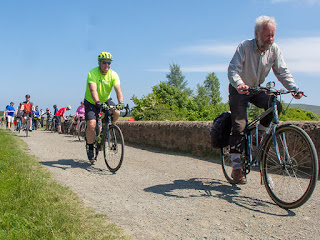 More quiet back roads around Bonaly followed before making our way up Bonaly Road, past the primary school, over the City Bypass and along Torduff  Road to Torduff Reservoir. As we were now in the Pentland Hills, the climbing began. On past Clubbiedean Reservoir and we were on rough rocky tracks that didn't make for easy going, especially given the very dry conditions under wheel. At least the climbing was now behind us. unsurprisingly given the lovely summer weather, it was very busy at Harlaw Visitor Centre. All the picnic tables were taken, so lunch was taken on the banks of Harlaw Reservoir. A picnic lunch on a fine sunny day sitting in the Pentlands beside a reservoir in good company - what more could anyone want? Oh, and the satisfaction of having gotten there under one's own steam. 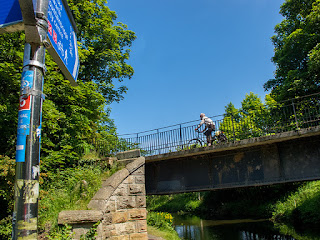 Lunch over; we rode off along the track past Threipmuir Reservoir to begin the descent of Mansfield
Road. The road was in a terrible state and we all had to be aware of the awful potholes that could so easily catch out the unwary; especially on a descent. We all made it safely down into Balerno. There was a long queue of traffic on the main road out of town due to temporary traffic lights. The group circumvented these, and soon we had left the busy road behind and were enjoying the Water of Leith path. Onwards through the Colinton Tunnel (which always reminds the writer of the "Italian Job") to the canal. Here, we would usually follow the canal back into town. But not this time. The leader took us away from the canal on an unfamiliar [to many] route through Redhall. We crossed Longstone Road and a [very easy to miss] cut-through beside the Longstone Inn took us onto a path that led to Stenhouse. From there we went through Saughton Park and on to Murrayfield where preparations were under way for the evening's Rolling Stones concert. Through Roseburn Park, and the familiar route via Russell Road, Dalry Road, the Telfer subway, Leamington Bridge and the King's Theatre saw us return to the Meadows.

Thanks to David for leading us on such a lovely route through the Pentlands on such a glorious day.
Interesting little twist near the end by taking us through Redhall and Longstone - somewhere very few of us had been before.