The route for today's ride started as an attempt to circumnavigate Edinburgh Airport by the shortest route. Whilst recceing the route, we made a few changes and tweaks such that it should perhaps best be described as a ride to Kirkliston. 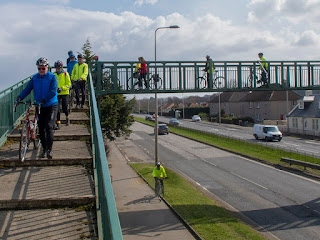 We were blessed with spring-like weather. Being warm and dry on the bike was something we hadn't experienced in many a long month. A turnout of twenty riders was reasonable; a few of them just returning after a winter lay off. Following the customary leader's briefing, we headed off towards Bruntsfield Links and to Leamington Bridge where we joined the canal. We stayed beside the canal passing Polwarth, Slateford, Kingsknowe, Wester Hailes and crossed the City Bypass. We had just begun to walk across the Slateford Aqueduct when the leader stopped and told those behind him to back up off the aqueduct. A pram was heading towards us that was almost as wide as the path. There was no way the group and pram could have passed eachother. The group ventured onto the aqueduct again. Very shortly, we were squeezed up against the railings letting a suicide pilot cyclist ride past us. No idea how he avoided ending up in the canal. We had to stop several more times to let pedestrians pass. It was the busiest most of us had ever seen that stretch. We left the canal at Hermiston. This was our first sweetie stop of the day on the bridge over the canal. From there, quiet back roads took us to Ratho where we regrouped. Onwards to Ratho Station. Although there is no longer a station there; a delightful little cut-through for pedestrians and cyclists took us across the railway and down towards the busy A8. The footbridge with steps is far-from-ideal; but much better than the alternative of dashing across four lanes of fast moving traffic! The path beside the A8 took us to Newbridge, one of the busiest roundabouts in Scotland. We soon left the traffic noise behind as we headed onto the path that follows the route of the old railway, and found ourselves in the countryside. A lovely route, but better in summer. Today it was rather muddy in places. The leader missed the point where we should have left the path. But he quickly realised his mistake, meaning only a couple of riders had to turn round before heading up the slope to the road. Once on the road, it took but a couple of minutes to arrive at the Conifox Garden Centre for our lunch stop. 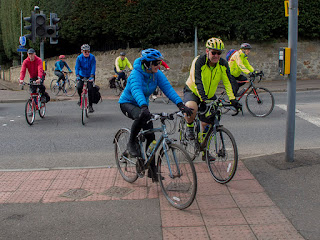 With the group fed and watered, we headed off on a quiet road past the airport radar installation. We then joined a busier road that took us to the Burnshot Bridge. Road closures and diversions remain in place; but there is a lovely new wide and well surfaced path for cyclists. Through the underpass, across the road and we were back on the familiar path beside the A90 heading for Cramond Brig, where we enjoyed our second sweetie stop of the day. We were now back on familiar paths heading back towards town via Barnton, Silverknowes, Craigleith and the Roseburn path. At Fountainpark, we took a minor detour to see the newly opened Boroughmuir High School. Riding down the quiet road beside Leamington Bridge, the lead rider was confronted by a pedestrian walking up the middle of the road looking at his phone and oblivious to all around him. "Watch where you're walking" called out the lead rider. "Watch where you're cycling!" snapped back the pedestrian. Some people really should not be allowed out on their own!

Everyone seemed to have enjoyed the ride. We visited places that were new to many; and of course, how nice it was to have some warm and dry weather. Please let this be the start of some decent weather. It really did feel as if winter would never come to an end.