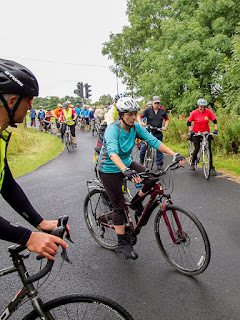 Today's leader, Jim wanted to claim this as the 20 Milers first non-electric ride. That has nothing to do with there being no electric bikes on today's ride. Rides without any electric bikes present are the norm. No, this was our first ride where a power cut at our lunch stop almost resulted in the group going unfed. In the couple of hours before the start there was heavy rain. As the riders assembled at the meeting point, this had turned to light drizzle and it was dry by the time we rolled away from the Meadows. Considering the weather, the Festival being in full swing and it being the holiday season, a turnout of 26 riders was quite reasonable. A few new faces and a few that have only been a couple of times before were a welcome addition to the regulars. Leaving the hustle and bustle of the Festival behind, we headed off to the Innocent Railway path. At Duddingston Road West we cut through the industrial estate, crossed Peffermill Road and took the path through Craigmillar Castle Park. We had a stop where cakes and sweets were passed round, despite it seeming as if we hadn't travelled very far and us not being far from lunch. We skirted the Royal Infirmary, passed the new houses that are being built and emerged onto The Wisp. Fortunately this busy road has a shared use pavement / cycle path beside it. Through the quiet back streets of Danderhall, across Old Dalkeith Road and we were in the lovely Drum Estate. A short run down Gilmerton road and we were at our lunch stop, the pub opposite Dobbies. We seldom get to our lunch stop by 1200. This time it was a good job we did. Fortunately, everyone had been served and had almost finished eating when the pub was plunged into darkness due to a power cut. Had it happened sooner there could have been a near-riot as the 20 Milers have something of a reputation of cycling on their stomachs! 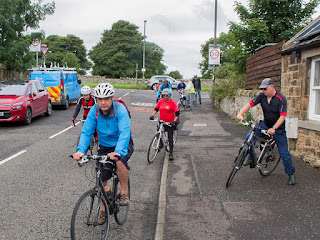 Although it wasn't sunny, stepping out from the darkness of the pub was quite a shock. We spent a short while squinting before heading off. We took the busy road into Dalkeith. This involved negotiating the Eskbank roundabout. It is small with numerous exits, many of them with poor views of approaching traffic. In the writer's opinion this would be a front runner in the prize for the worst roundabout in Scotland. Fortunately, we all got across without incident. We cut through a housing estate and entered woods via a time-consuming kissing gate. Obviously, no one expected 26 cyclists to pass through. Through the woods, a park and across a busy road. Due to the power cut, the pedestrian crossing was out of action. So crossing the road took a little longer. But as we had arrived at lunch early and felt no need to linger with the pub in darkness, we expected to be early returning to town. Through another park, across another out of action crossing and we were sweeping past Dalkeith High School onwards to Whitecraig. From Whitecraig we took the path towards Musselburgh, cutting off to the railway station and on past Queen Margaret University to Newcraighall. From there we joined the path that took us back to the Innocent Railway for our run back into town. Middle Meadow Walk was heaving with pedestrians. There seemed to be as many walking on the cycle path as on the part reserved for them. Oh yes, it's Festival time! The next time a ride starts from Middle Meadow Walk (our Extra ride on 26th August starts from Fisherrow Harbour), the Festival will be over.
Thanks to Jim for leading us on a pleasant ride. Thanks to the weather for drying up after a wet start to the day, and thanks to the power cut coming after we had all got our lunch.