A windy sojourn to Linlithgow 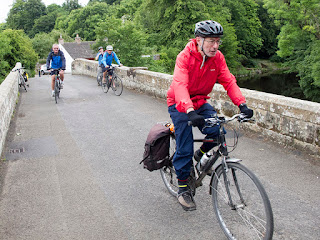 For the second 20 Milers Extra outing of the year we headed into West Lothian to the historic town of Linlithgow. It was a cool day with a much stronger wind than expected in late June. Battling into the wind heading out did mean that it helped blow us home. We may have been home in record time had it not been for some stiff climbs. One rider was glad he had opted to bring his electric bike; whilst another was delighted that he helped push her up the steeper parts! A good turnout of 22 riders, with a few new faces rolled away from the start point at Craigleith. It was lovely to see our leader for today, Julia, riding the late Logan Strang's bike. The very familiar route through Barnton, over the Cramond Bridge, the path beside the A90 and Dalmeney soon had us in South Queensferry despite the headwind. Following a comfort stop in the town, we were on our way again. One of our regulars suffered a puncture at this stage. What should have been a quick and easy fix was compounded by not one, but two faulty inner tubes. This was obviously going to take longer than expected. It was agreed that the victim and one other would fix the puncture and meet us in Linlithgow for lunch. It was not a day for standing around. Having got quite cool waiting, it was a relief for the main group to be moving again. We headed out through the Hopetoun Estate. To everyone's delight, the irritating gate that used to take ages to get anything other than a very small group through had finally been replaced by something much more user-friendly. This replacement was long overdue, but most welcome. 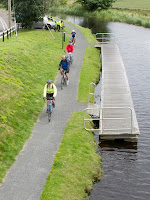 Leaving the estate behind, a mixture of paths, quiet roads and a path alongside a busy road led us to Philipstoun. Whilst crossing a busy road at a blind bend, someone shouted "car!" so loudly that a couple of rides fell over and landed in a heap in the middle of the road. Fortunately, the car stopped, the riders picked themselves up, brushed themselves down - the drama was over and we were on our way again. Across a lovely hump-back bridge, a right turn and we were on the towpath beside the Union Canal. This path led us to Linlithgow and our lunch stop. In the square at the bottom of the hill that led up to Linlithgow Palace, it felt quite cool and windy. As a result, most of the group headed off to various cafes. Only four brave souls made their way up the hill to the palace for a picnic lunch. Surprisingly, it was less windy and much warmer there. For a short time the sun came out and the picnicers enjoyed what would be the warmest part of the day. 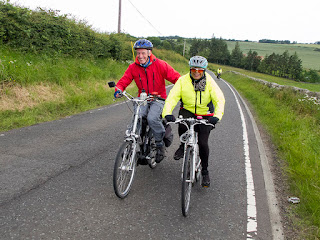 After lunch, we regrouped in the square and retraced our route to the canal. The two missing riders were now back with us. There were a few puzzled faces as we headed west! Not to worry - the leader knew exactly what she was doing. It was a great relief to have the wind behind us. Before long we were on the climb up to Ochiltree Castle. We had been warned to expect a stiff climb; but it still took many by surprise and the group was soon quite spread out. It was on this stretch that the rider on the electric bike was able to [quite literally] lend a helping hand and push another rider towards the top. Another rider had told us earlier that she had seen a fantastic T-shirt slogan that read, "It's a hill - get over it". So that's what the group did. There were a few moans when we thought we had reached the summit, only to find a further climb around the next corner. Eventually it was all behind us and a pleasant run on a high level road followed before heading gently downhill all the way to Niddry Castle and Kirkliston. A comfort stop was planned at Kirkliston Leisure Centre. Unfortunately, it was closed. So to any bystanders, a group of cyclists rode into the car park, did a circuit and left. We rode through Kirkliston and joined the cycle path for a pleasant ride through the trees before heading onto the road towards Burnshot Bridge. There we had to navigate through the roadworks, nip through the underpass and we were on our way back to Cramond Bridge and onwards to Craigleith. Thanks to Julia for leading us on an interesting (and at times challenging) ride out to Linlithgow.