The dirty dozen ride to Roslin 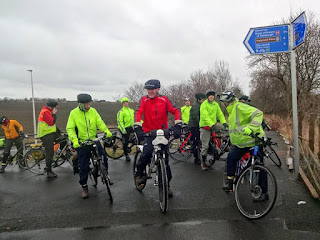 Today's ride to Roslin was never likely to be cancelled due to the weather, despite a forecast promising heavy rain all day. But with that in mind, previous heavy rain and some muddy paths to contend with, anyone that had previously cleaned their bike must have wondered why they had bothered. It was also very cold, but fortunately not icy. The weather obviously had a big impact. Only 12 riders made the start, all of them hardened regulars. It's been a very long time since we had such a low turn out. No need to worry about two groups or any indepth briefing. We headed off towards the Innocent Tunnel. One rider was heard to say, "I'm wearing every item of clothing I possess". At Duddingston Road West, we cut through Kings Haugh to Peffermill Road. Once across, we took the path through Craigmillar Castle Park and encountered the first mud of the day before emerging beside the Royal Infirmary. We crossed the busy Old Dalkeith Road, pausing to allow an ambulance into the hospital and headed into Moredun. A road closure in the estate diverted us from our usual route. But we were soon back on course and heading for the cycle track that would take us all the way to Roslin. A mixture of mud and slushy snow made the path quite slippery. But a drama-free ride took us to our lunch stop in Roslin. It was lovely to be inside the warm pub eating hot food on such a cold day. Some even shed layers of clothing as they warmed up. 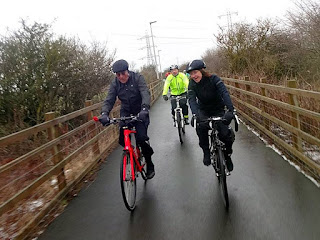 All nice and warm, that inevitable shock hit us on stepping back out into the cold. Despite a few grumbles and someone saying, "I'd rather have an afternoon nap", we were soon rolling again. As we set off, a small boy was heard to say to his mum, "look, an old man on a bike". Oh, from the mouths of babes! Consternation followed as the group tried to determine who he had been referring to! We headed back the way we had come. But we left the path and took the old route via Straiton pond. This stretch was the muddiest of the day and brought us out at Straiton Retail Park. Paths beside busy main roads took us to Burdiehouse, where we joined Burdiehouse Road. From there we headed back towards town via Howden Hall Road, Liberton Gardens, Liberton Road and Craigmillar Park. On Mayfield Gardens we were hit by a gust of wind so strong that it almost stopped us in our tracks. We recovered from that and made our way back to the Meadows where the leader declared the ride over. At just under 20 miles, this had been a shorter ride. But given the weather and mud, no one seemed to mind. Whilst the weather was far from pleasant, it was far from the worst we have endured and was not as bad as forecasted. Thanks to Jim for leading us on an interesting and less familiar route to and from Roslin. Thanks also to Verity on her maiden outing as backmarker. A role she seemed to relish. Something of a natural; we expect to see her bringing up the rear again soon.