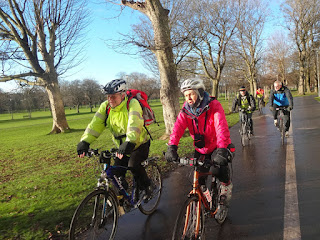 The 20 Milers opened their account for 2017 with today's ride to the Gallery of Modern Art. Despite the sunshine, it was cold and there were a few icy stretchs on some paths to watch out for. Despite a run there being a tried and tested one, Mike added to the interest by changing the route in places. The section between Holyrood Park and Lochend Park had a number of our regular riders unsure as to where they were. There were 19 riders at the start. A reasonable turnout given the cold and icy conditions. But we have had higher January turnouts in the past. Surely those "I'm going to get fit in 2017" new year resolutions couldn't have been abandoned less than half way through January? It's always good to have new riders turn up. This time there was only one. But we hope they enjoyed it enough to come back. The group rolled away from the Meadows and took the familiar route towards the Innocent tunnel. One of our regulars was so used to going through the tunnel, he headed that way and had to be called back. On this ocassion, we continued past the tunnel entrance and made our way into Holyrood Park and whizzed down Queen's Drive. We turned off the road at the car park and made our way towards London Road. Via paths and quiet roads we made our way to Clockmill Lane. A cut-through between flats and a few more quiet back streets left many in the group wondering where they were. It's always nice to discover new parts of what you consider to be familiar territory. Arriving on Lower London Road, the majority knew where they were once again. A left turn was followed by a short spell on the very busy London Road. A right turn, more unfamiliar back streets and we found ourselves on a path that took us through Lochend Park to emerge beind the Hibs football stadium. We crossed Easter Road, and via Brunswick Road and Macdonald Road joined the path that took us into St Mark's Park where we stopped in the sunshine. So many snacks appeared that it was reminiscent of the Christmas Day ride. Suitably replenished, we made our way onwards past the Royal Botanic Gardens and into Inverleith Park. We passed the impressive Fettes College and made our way through the backstreets of Craigleith to the retail park. From there we made our way through the grounds of Mary Erskine School, along Ravelston Dykes Road and Ravelston Park to arrive for our lunch stop at the Gallery of Modern Art in Belford Road. 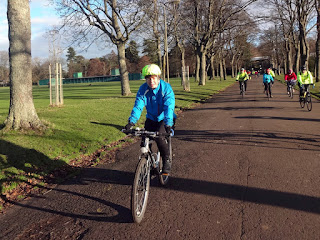 After a pleasant warm, and lunch in the cafe, we set off for what promised to be a relatively short run back into town. Before leaving the grounds of the gallery, there was some debate as to whether something there was a picnic table, fancy bike stand or a work of art! Cultural experience over; we retraced our steps to Ravelston Dykes Road. From there we made our way through the grounds of St George's School and on to the Roseburn Path. From the zig-zags via the Telfer subway, Fountainpark, the canal, Leamington Bridge and a twiddle through the backstreets of Bruntsfield, we returned to the Meadows. At barely 15 miles, this was one of the shortest rides for a while. The sunshine linked with the fact it wasn't quite as cold as earlier and it being quite early, had some riders feeling they should stay out longer. But it had been a good ride and finishing early after a shorter ride is more acceptable in January than July.