All paths lead to Gilmerton 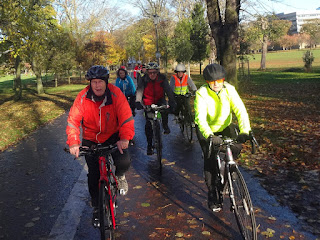 Today we explored the parks and open spaces in the south of the city on our way to Gilmerton. Our route included the newly restored cycle path to Danderhall. Earlier in the week, the forecast had promised a day of heavy rain. Fortunately that rain passed through in the wee small hours, leaving us with a mild and sunny morning. A very impressive 30 riders turned up at the start. Amongst them were three who had graduated from Easy Cycle. The leader made the decicion not to split the group in two. So a group of 30 rolled away and headed through the back streets of the Grange. At this point the back marker had a minor mechanical issue with his bike. As we were passing his house, he decided to nip in and swap his bike. This being a first for the group. Nothing if not resourceful these 20 Milers riders. We went through the grounds of the Astley Ainslie Hospital and on to the Hermitage of Braid. Through there we had to keep our wits about us as there were so many runners and dog walkers to share the path with. Tracking eastwards along the glen, we emerged at the A701. From there Double Hedges Road led us in to Inch Park before crossing the busy A7 in to Craigmillar Castle Park. After a brief run around the park, we crossed on to the paths behind the Royal Infirmary. There we found several new and rebuilt paths, which we used to navigate our way to the Wisp. We meandered through the streets of Danderhall to come out on Old Dalkeith Road. After crossing that, we went through the green door set into the wall to find ourselves in the Drum Estate where we admired the woods, farmlands and stables, with its monument to the Merkat cross; before emerging right next to the Abbey House Hotel - our lunch stop. 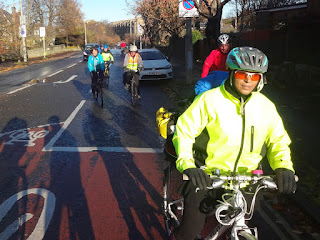 Everyone got fed. But the impression was that they were not used to having such a large hungry group arriving en masse. On stepping outside it soon became clear that the temperature had dipped whilst we were having lunch and the sun was obscured by clouds. we headed South-east along the shared pavement of the B6392 past Dobbies Garden Centre an on to the Eskbank roundabout. We negotiated this horrible roundabout safely before entering the paths around the Newbattle Golf Club. There was a slight delay as we squeezed through the kissing gate one-by-one to emerge in the beautiful woodlands. We went through the delightfully named Waterfall Park and cut through the housing estate. From there we made our way past Dalkeith High School and on to Whitecraig. From there we took the Grove towards Musselburgh. Instead of following this all the way, we turned left and crossed the River Esk. This took us through the Fergusons and we came out at Musselburgh railway station. From there we followed the path to New Craighall. A short wait ensued before we could turn right onto the main road, which was busy with traffic heading to and from Fort Kinnaird. A quick run through the village and we were back on the quiet cycle track. This led us to the Innocent Railway for the familiar run back in to town. Thanks to Jim for putting his encyclopaedic knowledge of Edinburgh cycle paths to such good use and leading a very enjoyable ride, at a sensible pace. No idea who organised it, but whoever was in charge of the weather did us proud for November. To round off a pleasant day, a contingent of eight elected to sit outside at Victor Hugo, watching night [quickly] fall. A fine, surprisingly warm day, and maybe the last time this year we get to enjoy sitting outside in the evening; though we do keep saying that!