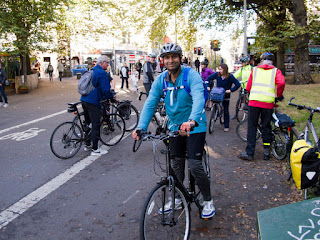 Today's ride saw us head out to the Edinburgh International Climbing Arena; the largest indoor climbing wall in the world. The route was not the most direct we could have taken. But that made it all the more interesting. With a lovely sunny morning that was reasonably mild, we were expecting a good turnout. In the end there were only 18 of us which was surprising and slightly disappointing. But in amongst those was one of our regular riders on his recumbent trike and a visitor from across the pond. The visitor from Chicago had decided to stay on for a couple of days after a business trip and try cyling in a city he had never visited before. He hired a bike, found out about the 20 Milers and joined us. We knew we could show him some lesser known parts of Edinburgh that only the most adventurous of tourists would find without local guides. David led us away from the Meadows in one group towards Whitehouse Loan, where we had to negotiate our first set of roadworks. We made our way through the quiet back streets of Morningside; crossed the busy Comiston Road and into the lovely Braidburn Valley Park. Those that hadn't been through it before, were very impressed. Leaving the park behind, we made our way through another one - Colinton Mains Park. From there we made our way past the military houses close to Redford Barracks to join the busy Redford road. We had a brief comfort stop on Colinton Road. From there we made our way onto NCN 75 beside the Water of Leith and headed towards Balerno. Turning off the cycle path, we rode through Riccarton and entered the Heriot Watt University campus by the back entrance. After winding our way through the campus, we crossed the busy A71 Calder Road. From there we followed Hermiston House Road, turning off to join the Union Canal towpath. Just before the Bridge Inn we rode past the relatively new Ratho Marina. This was a lovely little marina that many of the group hadn't seen before. A bit further along the towpath and the leader brought us to a halt at the bottom of a steep flight of steps. The Climbing Arena and lunch was at the top of these steps. Two riders were needed to carry the trike up. One by one, all the bikes were carried to the top. From there a short ride saw us all arrive on the balcony where most of us would eat our lunches. It was like a summer's day. Very warm, sunny and no wind. There were one or two wasps about to annoy us. But everyone enjoyed lunch. We may be well into next year before we have lunch sitting outside in such perfect conditions again. 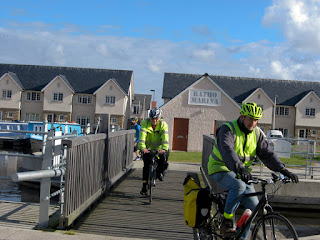 Unfortunately, the first thing to do after lunch was go back down the steps. The group was soon back on the towpath heading back the way we had come. The sun disappeared behind clouds and a cool breeze picked it. Along this stretch, several riders stopped to put on an extra layer. We left the towpath and made our way to Edinburgh Park. From there we took the cycle path beside the tram line through Sighthill and Broomhouse. We crossed the tram tracks and made our way past the imposing Jenners Depository. We had to contend with more diversions and roadworks to get past Murrayfield and make our way into Roseburn. From there, the familar route via Dalry Road, the Telfer subway and Leamington Bridge took us back to the Meadows. Thanks to David for leading an interesting ride. We had succeeded in showing Our friend from Chicago some less familiar parts of Edinburgh, well away from the usual tourist haunts. So if you're reading this, intending to visit Edinburgh and fancy seeing some less familar parts by bike; sort out hiring a bike and the 20 Milers will make you most welcome.