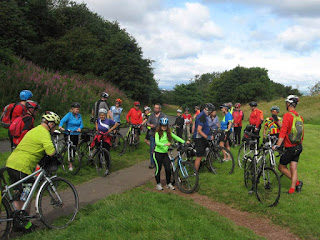 Our regular meeting point at the top of Middle Meadow Walk was heaving with people courtesy of the Edinburgh Festival. Today's ride to Dalkeith was something of an antidote to the hustle  and bustle of the city in August. A bright, sunny and pleasantly warm morning greeted the 24 riders that turned up at the start. One unicycle and one recumbent made for a more eclectic mix of cycles than usual. It was nice to see some new comers in amongst the regulars. Numbers meant we could manage with one group. It's always nice to have a big turnout; but it becomes more challenging when a second group leader and back marker need to be pressed into action. Following the customary leader's briefing we headed off. A one way system in operation around George Square forced us to take an alternative route. For once we rode up, rather than down Middle Meadow Walk. Going round the Forrest Road and Bristow Place triangle soon had us back on the right road. From Potterow we turned into West Nicolson Street and made our way into Holyrood Park. Due to the volume of traffic, it took a couple of minutes to get all of the  group safely across Queen's Drive and onto the cycle path at the other side. Unsurprisingly, there were quite a few pedestrians about on this shared path. But we made good progress and were soon climbing the steepest hill of the ride up towards Dunsapie Loch. The hill wasn't too steep, and we turned off before too long to head onto the quiet residential back streets of Willowbrae. We crossed the busy Willowbrae Road quite easily, before heading through Northfield and into the delightful Figgate Park. A quick whizz through the park and we found ourselves rattling down the bumpy cobbles of Brighton Place. We were soon heading along the Portobello prom. Despite the sunshine and games of beach volleyball, it would take some stretch of the imagination to think we had magically arrived in Rio! The coast road took us to Fisherrow Harbour where we had a brief comfort stop. From there we headed out past Tesco and onto the Grove and onwards to Whitecraig. As it is no longer possible to ride through Dalkeith Country Park free of charge; we opted to take the busy A6094 into Dalkeith. That really is not a pleasant road to cycle along. The way some drivers drive along it making it quite a dangerous option. Fortunately, we made it safely into Dalkeith in time for lunch. Part of the group went to the pub with the remainder heading to King's Park. For a cycling group renowned for riding on it's stomach; there was nearly a major incident when the leader inadvertently ate someone else's lunch in the pub! With the situation rectified and everyone fed, we hit the road again. 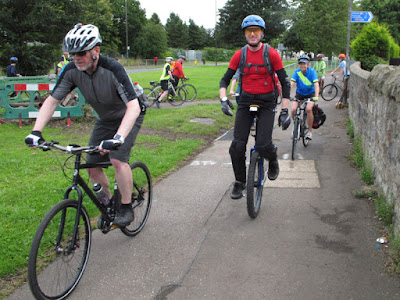 Through a new housing estate and an obstructive gate and we were in the grounds of Newbattle Abbey. Leaving the estate behind, we made our way to Dalkeith High School via quiet residential streets and cycle paths. At the school we joined NCN 1 for a pleasant run to Whitecraig. Much nicer than the busy A6094 we had encountered earlier. Remaining on NCN 1 we made our way down the Grove back towards Musselburgh. Just before the bridge that carries the East Coast mainline, we turned off and crossed the bridge over the River Esk. This path took us past the golf course, under another railway bridge and through a housing estate, bringing us out at Musselburgh station. A run down the quiet path to Newcraighall was followed by a short spell on the busy road through the village. We soon left that behind and most of the remainder of our ride back to the Meadows was on the delightful Innocent Railway. Our respite from the busyness of the  Festival was clearly over when we arrived back at the Meadows. Thanks to Michael for leading a pleasant ride that allowed us to escape from the Festival for a few hours.