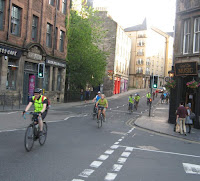 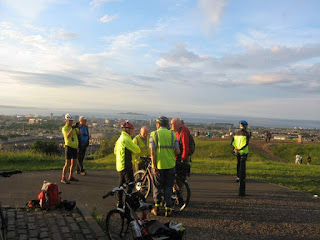 For the fourth year running, we were granted a beautiful sunny evening for our summer solstice ride. A dozen of us set out from the Meadows yesterday evening at 7 pm, with Jim as our guide. We were treated to an eclectic tour of the city, taking in the Astley Ainsley, Craiglockhart Park, the Union Canal, the Leamington Basin and the EICC. After crossing Lothian Road, we enjoyed a fast run down the Grassmarket and Cowgate to Holyrood, where we stopped to peer through the gates of the palace (nobody appeared to be at home).

Next, we headed up Calton Road, then climbed a steep footpath to Regent Road for two more sightseeing stops: the Burns Monument (originally this was just a statue of the poet; the monument was built later with money left over) and the Stones of Scotland (created in 2002 to mark the rebirth of the Scottish parliament).

Then came the high point of the evening (literally and figuratively): the climb to the summit of Calton Hill. Here we enjoyed a superb view over the city to the Firth of Forth, the Lomond Hills and beyond. Although it was now after 9 pm, the temperature was still around 20C, with the sun shining brightly.

At this point, the group split into two. The main body headed to Restalrig, Leith Links and Stockbridge. Meanwhile, the early-to-bedders descended to Waterloo Place and North Bridge, and so back to the Meadows.

Leader and map: Jim
Report and photos: Mike
Posted by Mike Lewis at 09:05